Feeding the hungry in the East End 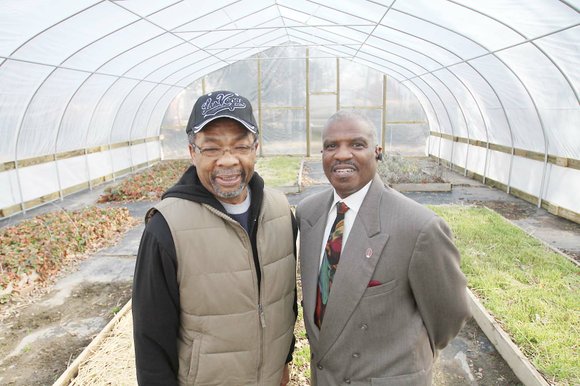 They sought affordable local vegetables and fruits at the launch of the first farmer’s market last Thursday in the dining hall at 31st Street Baptist Church.

The good news: “We nearly sold out,” said Dr. Morris Henderson of his East End church, which has earned the historic designation by the U.S. Department of Agriculture as the nation’s first urban farm.

There was an added bonus: SNAP recipients shopping at the farmer’s market could select an additional dollar’s worth of vegetables or fruits for every $1 purchase, thanks to a $10,000 matching donation from Bon Secours Richmond Health System.

It is the latest initiative by the trailblazing church at 823 N. 31st St. to fight hunger in a disadvantaged area of the city known as a food desert, or community where affordable and nutritious food is difficult to obtain.

While there, some of the officials donned aprons and helped serve a lunch of spaghetti, corn, bread, iced tea and dessert to some of the more than 100 people who turned out for the church’s daily lunch feeding program in the dining hall.

Tricycle Gardens, a Richmond-based non- profit organization whose mission as stated on its website is to “grow healthy food, healthy communities and a healthy local food system,” is managing the farm project at 31st Street Baptist, providing two farm managers and other expertise.

Local farmers will bring their produce to sell at the farmer’s market from 11 a.m. to 1 p.m. each Thursday.

Meanwhile, the church will continue to grow produce at 24 cultivated, raised garden beds that sit on a 0.85-acre lot behind the church.

Next to them is a hoop house — a series of large hoops covered with a layer of heavy greenhouse plastic. Heated by the sun and cooled by the wind, the structure provides a year-round space where vegetables and fruits can be grown.

It was built two weeks ago with the help of a USDA grant, and is scheduled for a spring unveiling, Dr. Henderson said.

Nearby is a botanical garden to grow flowers to provide to sick or shut-in church members and to spruce up the church.

And a spring groundbreaking is planned in the same area for a meditation garden to be lined with fruits and vegetables where, according to Dr. Henderson, people can go “for tranquility amidst the chaos and confusion of life.”

“I teased the pastor that he now is the Rev. Dr. Pastor Farmer Morris Henderson,” said Ms. Rowe in an interview at the Free Press office following the event. Church members have generously donated funds to help make the farm project possible, Dr. Henderson said. 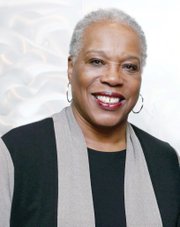 “This is a model for us,” Ms. Rowe said. “We’re going to talk to our other regions, talk to other churches that may be interested in becoming a farm, having a garden they operate. This is a whole new area for us to explore.”

She sees the growth of urban farms as a powerful tool in the fight against hunger in the inner-city and in the nation, where the latest data from 2012 show:

• One in seven Americans — or more than 49 million people — live in households struggling with hunger;

• 15.7 million children face food insecurity, with from 5 percent to 6 percent of those children facing dire hunger.

Ms. Rowe said the problem exists disproportionately in African-American communities, largely because of a lack of jobs, transportation and access to stores selling healthy, affordable food. She said hunger also is rising in rural communities and among senior citizens, largely because seniors and rural dwellers do not seek public assistance for fear of being stigmatized.

Ms. Rowe said the farm designation enables 31st Street Baptist Church to apply for grants for technical assistance from the USDA, ranging from crop production and soil conservation to how to enlist other community members in the healthy food initiative.

Dr. Henderson, who has served as pastor at the church since 2007, said the church is committed to nutrition outreach in the community. “We’re here for the long haul,” he said. “We want to offer our community a holistic approach to living by using the green gospel. Turn out the lights when you’re not using them. Turn the water off when you’re brushing your teeth. We want to try and conserve and protect Mother Nature.”

He said he’s ready to “take this show on the road to show other churches how we did it.

“To whom much is given, much is required,” the pastor stated, citing a biblical message.