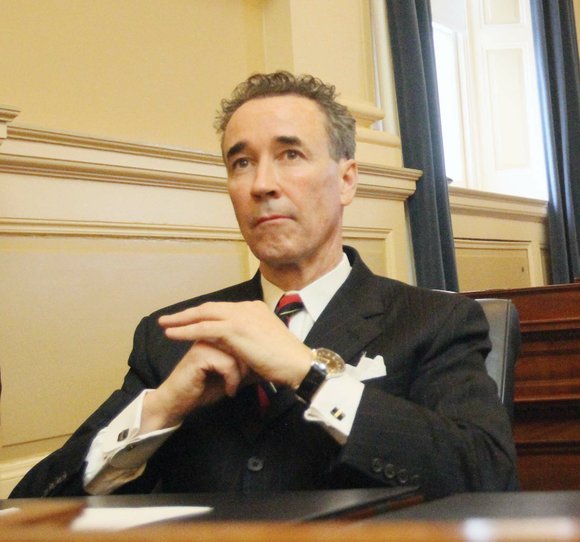 The situation has gone from bad to worse for scandal-tarred Delegate Joseph D. “Joe” Morrissey.

The first legislator to spend his days in the GeneralAssembly and his nights in a jail cell was just hit with four new felony charges.Those charges essentially allege he was involved in filing a phony court document in the case that led him to be put behind bars in the first place.Delegate Morrissey is to be arraigned Monday, Feb. 9, the same day former Gov.

Bob McDonnell is to begin his two-year federal prison term on his corruption conviction.

While the delegate calls the new charges “absolutely false” and claims they will be debunked in court, this new scent of wrongdoing that surrounds him is giving ammunition to his legislative colleagues in the House of Delegates who want to expel him as unfit to serve. Republican House Speaker William J. Howell and Democratic Minority Leader David Toscano both said later Wednesday that they are still considering the options for dealing with Delegate Morrissey.

“This is truly a painful and embarrassing chapter” in the history of the House, Speaker Howell of Stafford County, stated in a release. “The House will evaluate the new indictments as it pertains to disciplinary action. ... We are considering all options.”

The new charges result from secret new scent of wrong doing that surrounds him is giving ammunition to his legislative colleagues in the House of Delegates who want to expel him as unfit to serve.

“This is truly a painful and embarrassing chapter” in the history of the House, Speaker Howell of Stafford County, stated in a release. “The House will evaluate the new indictments as it pertains to disciplinary action.... We are considering all options.”

The new charges result from secret indictments handed down last week by the Henrico grand jury, but unsealed Wednesday against Delegate Morrissey and Deidre L.Warren, mother of the former receptionist at his law office, and tie directly back to the original case.

The original case stemmed from charges he allegedly had a sexual relationship with the 17-year-old receptionist, Myrna Pride, when she worked for him. The relationship led to his conviction on the misdemeanor charge of contributing to the delinquency of a minor.

Both Delegate Morrissey and Ms. Pride, who is now 18 and pregnant, continue to deny anything happened between them at the time.

He was charged with several felonies, but ended up entering an Alford plea to the misdemeanor charge, a plea that allowed him to state he was not guilty, but acknowledge the prosecution had sufficient evidence to convict him.

The new indictments allege that he and Ms. Pride’s mother conspired, forged and submitted the phony document to the court as part of the plea deal that led to his six-month sentence to jail. He is on work release and is expected to serve only three months based on the practice of cutting jail time in half.

The allegedly forged document that Mr. Neely used to gain the new indictments relates to a child support agreement purportedly created in 2006 between Ms. Warren and Ms. Pride’s father, Coleman Pride, and which bears their purported signatures. The document was not filed in court with a three-page custody agreement the parents accepted at the same time nine years ago and is not notarized.

The document provides that Mr. Pride is to pay $50 a week into a bank account he would set up with his daughter, then 10 years old, with the payments to continue until she turned 18. She said she planned to use the money to pay for college.

The document was a key to Mr. Morrissey’s claim that Ms. Pride was at his home consulting him about the agreement and her father’s alleged removal of the accumulated $28,000 from the account in late August 2013. That’s when Henrico Police first came to Delegate Morrissey’s house to inquire about the girl’s presence. The officers were responding to a complaint from the father that Mr. Morrissey and his then 17-year-old daughter were involved in an illegal relationship.

After the plea hearing in December at which Delegate Morrissey was sentenced, Mr. Pride told authorities that he had never signed the agreement and that his signature was forged.

That triggered the investigation, including a search of Delegate Morrissey’s law office and the seizure of computers on Jan. 12, the day before a special election that he won.

Delegate Morrissey described the new charges as an unwarranted, “mean- spirited” attack by Mr. Neely that would be exposed. He told reporters he would “prevail” and indicated his defense lawyers would produce the original of the disputed document to show it had been signed eight years ago when he had no relationship with the family.

Delegate Morrissey returned to the House of Delegates after winning a three way race for his seat in the Jan. 13 special election. He set up the election by resigning his seat in the wake of his conviction, effective the day of the election, and then successfully won it back by running as an independent.

He has been mum on whether he would run this year for a full two-year term when all 100 members of the House are up for re-election.

He has hardly received a hero’s welcome. Instead, as the only independent member of the House, Delegate Morrissey has been left isolated as a man without a party. He is unable to participate in the House Democratic Caucus of which he once was a passionate member.

In addition, Speaker Howell has refused to assign Delegate Morrissey to any of the House committees where most of the legislative work is done.

Delegate Morrissey previously served on the Education and Science and Technology committees. He can testify as a patron or co-patron of legislation before a committee panel, but otherwise cannot participate.

He also can vote on measures that come before the full House, but few expect to hear him speak on the House floor. He would be hard-pressed to win recognition to address the House from Speaker Howell, who disdains him and regards his conviction as a disgrace.

Before Delegate Morrissey went to the floor for the opening of the General Assembly last week, he told reporters that he would still have plenty of work. He said that “90 percent of what we do as legislators involves constituent services,” and he said he would have more than enough to occupy his time.

While many in the House still do not talk with him, he did receive a warmer reception than first portrayed.

In response to last week’s Free Press article on his return to the legislature, Delegate Morrissey noted that “several delegates came over to just share a kind word, including, but not limited to: Patrick Hope, Lionell Spruill Sr., Joe Preston (a seatmate and friend of 20 years), Eileen Filler-Corn and Delores McQuinn.”

Delegate Morrissey said several other legislators stopped by his new office on the seventh floor of the General Assembly Building and offered their congratulations, urged him to hang in there or offered similar sentiments.

The Free Press had reported that only Delegate McQuinn, D-Richmond, had come over to speak with him. Delegate Hope, D-Arlington, Delegate Preston, D-Petersburg, and Delegate Spruill, D- Chesapeake, later confirmed Delegate Morrissey’s comment.

Delegate Filler-Corn, D-Springfield, did not respond to a request for comment.