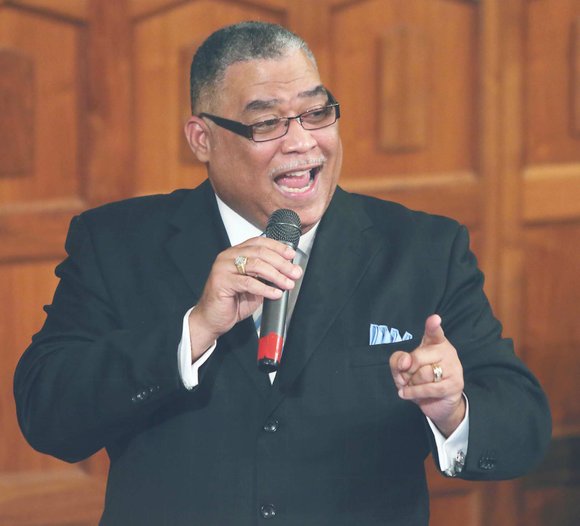 The occasion: The annual Citywide Mass Meeting to commemorate the life and legacy of Dr. Martin Luther King Jr.

Dr. Peter M. Wherry, pastor of Mayfield Memorial Baptist Church in Charlotte, pro- claimed to an audience of about 300 people at Cedar Street Baptist Church of God that African-Americans one day will realize Dr. King’s dream of freedom for all.

“No bullet can stop it,” he said. “No hatred can block it. No movement can stall it. No politics can undo it.”

He followed with a clarion call for ac- tion, drawing the au- dience to its feet in applause.

Dr. Wherry, an alumnus of Virginia Union University and currently an adjunct professor in Baptist history there, drew his message from the Old Testament book of Isaiah 49:1-8, in which the prophet Isaiah forecast how Israel would be scattered by its enemies, protected by God and eventually restored to its greatness.

In the mold of Isaiah, Dr. Wherry said, Dr. King was met “with hatred and despising.”

“It seems ironic that the very people in need of a prophet are usually the ones to reject the prophet and his message,” he said.

Dr. Wherry encouraged audience members to persevere no matter what obstacles are in their way.

“If enough oppressed people finally realize that the movement toward freedom does not depend on any human agency, they could kill a hundred prophets and we would still go free. This was (Dr.) King’s message.”

He said God is most concerned with helping “the poor and oppressed,” as Dr. King sought to do.

The audience also was moved with the inspirational music of Cedar Street’s Associate Minister Arthur Roots and his rendition of “Stand”; the Rev. Carolyn Clark with “Bless This House” and “Lord Don’t Move the Mountain”; and Brenda Chavis with “If I Can Help Somebody” and “The Impossible Dream,” crafted to honor Dr. King.

Greg Hill, a 49-year- old manager at a Chesterfield County grocery store, said he attends the ceremony every year to “get recharged, to stay focused on keeping the dream alive.”

Mr. Hill cited two areas of improvement that would help the community to achieve Dr. King’s dream of a just society: Education should be attainable for everyone and police officers should be better educated on “how to deal with people of color in urban communities.”

“Black lives do matter,” he added.

Corey Fauconier, a 44-year-old musician and community volunteer, said he brought his two teenage stepsons, Elijah and Elliott Martin, to the event “so the next generation will be able to pick up where our generation leaves off.”

“Our elders fought for our rights,” he added. “It is our job to teach our children about the struggle. It is very important to be involved.”

Timothy James, an eighth-grader at Lucille Brown Middle School, ably served as the master of ceremonies at the gathering.

LivingtheDreamInc., led by the Rev.Ricardo L. Brown, co-pastor at Fifth Baptist Church in the West End, organized the event.

Members of the Theta Rho Chapter of Alpha Kappa Alpha Sorority at Virginia Commonwealth University volunteered to usher at the annual event commemorating the life and legacy of Dr. Martin Luther King Jr.