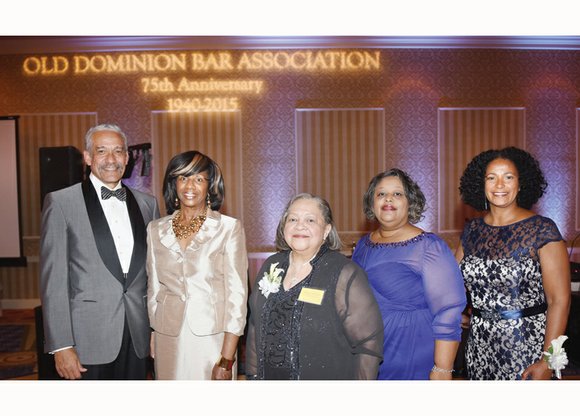 The president-elect of the American Bar Association praised the trailblazing accomplishments of the historic Old Dominion Bar Association at its 75th anniversary commemorative gala banquet Saturday night at a Henrico County conference center.

“Those individuals who founded the Old Dominion Bar Association are the giants that have led us to where we are today,” Paulette Brown told the audience of 150 people that included state and federal lawmakers, judges and attorneys.

“We stand on their shoulders. They opened doors for us and let us know that we are capable of doing great things,” she added.

Ms. Brown is a partner at Locke Lord LLP in the labor and employment practice group in Morristown, N.J. She is to begin her yearlong term as the first female African-American president of the 136-year-old largely white bar association Aug. 4.

She told audience members there’s still much work left to be done to help fulfill the ODBA’s mission of justice for all.

“Today, too many people feel that they are outside the umbrella of justice,” she said. “African-American lawyers like those in the Old Dominion Bar Association have historically led the way in ensuring equal justice. And your organization, I know, stands ready to continue to do that.”

She emphasized the imperative to ensure voting rights in communities of color, reverse the school to prison pipeline, bring about a more fair criminal justice system and to prepare the next generation of African-American attorneys and judges to represent the poor and voiceless as “America is expected to get browner and more culturally diverse.”

“We have to be ready for the change, ready to go beyond assumptions of what’s acceptable,” Ms. Brown said.

“From my hometown of Baltimore, to Ferguson to Staten Island to North Charleston, S.C., and most recently to Los Angeles, we’ve seen how the lives of people of color are still not given the respect they deserve as citizens of our democracy.”

“We need to have an acute understanding of our history in order to propel ourselves and others,” Ms. Brown said. “We need to have a continued vigilance and pursuit of civil and human rights. These issues are more important than ever.”

Saturday’s gala banquet and dance added an exclamation mark to a series of events designed to highlight the important work the ODBA continues to do to advocate for justice.

“The history of America is tied to the history of the African-American lawyers,” Gov. Wilder, an ODBA member for 55 years, told the Free Press prior to the banquet. “That’s why the bar is not here to celebrate these 75 years, but to commemorate what these 75 years have meant. And our job is to re-instill in others the need to keep that flame lighted for the kindling of human progress.”

William T. Mason Jr. of Norfolk, another early ODBA member, said there’s plenty more work for the group to do.

“All the problems with our judicial system haven’t gone away,” he said, citing the disproportionate number of African-American men behind bars. “There are still many things wrong.”