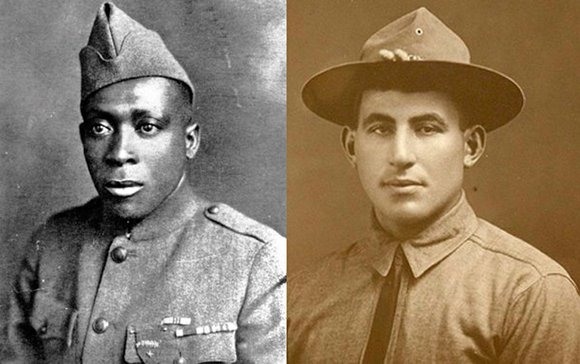 President Obama on Tuesday awarded posthumous Medals of Honor to two soldiers from World War I, one an African-American and the other a Jew, who arguably were denied the honor earlier because of discrimination.

The medals, the United States’ highest military honor for valor, went to Pvt. Henry Johnson, of Albany, N.Y., and Sgt. William Shemin of Bayonne, N.J., 97 years after they saved comrades on French battlefields.

“They both risked their own lives to save the lives of others,” President Obama said in the White House ceremony. “It’s never too late to say ‘Thank you.’”

Mr. Johnson, a member of the all-black 369th Infantry Regiment, known as the “Harlem Hellfighters,” and Pvt. Needham Roberts fought off an attack by a raiding party of at least a dozen Germans while on night sentry duty on May 15, 1918.

Wounded and under heavy fire, Mr. Johnson forced the Germans to retreat and kept Mr. Roberts, who was badly wounded, from being taken prisoner, the president said.

The Army’s website for Mr. Johnson said he advanced armed only with a knife.

Mr. Shemin, a Jewish soldier who served with the 47th Infantry Regiment, 4th Infantry Division, repeatedly exposed himself to heavy fire to rescue wounded soldiers from Aug. 7 to Aug. 9, 1918. When officers and other non-commissioned officers became casualties, Mr. Shemin took command of his platoon until he was wounded on Aug. 9.

Two of Mr. Shemin’s daughters, Elsie Shemin-Roth of Webster Grove, Mo., and Ina Bass of Somers, N.Y., accepted the Medal of Honor on behalf of their father.

There have been concerns that discrimination prevented Mr. Johnson and Mr. Shemin from being awarded the Medal of Honor. Army policy kept black troops from fighting alongside white units, and the Harlem Hellfighters served beside French colonial troops.

France awarded Mr. Johnson and Mr. Shemin the Croix de Guerre with palm for their heroic actions in combat.

President Obama said Mr. Johnson had been denied a Purple Heart medal despite being wounded 21 times and being so disabled he could not return to his pre-war job as a railway porter. He died in 1929.

Mr. Shemin received the Distinguished Service Cross, one step below the Medal of Honor, despite having been nominated for the highest honor. Mr. Shemin died in 1973.