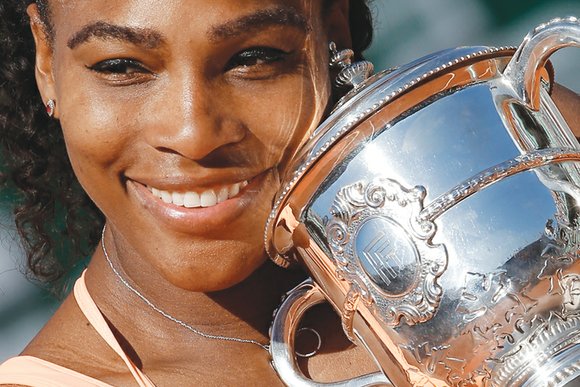 Serena Williams holds her trophy after winning the French Open championship Saturday in three sets at Roland Garros Stadium in Paris. It was her 20th Grand Slam title.

Nothing, absolutely nothing, could stop Serena Williams from winning her 20th grand slam singles title. She joyously bounced around in delight as she hoisted the glistening French Open trophy last Saturday.

It was a victory that seemed unlikely 24 hours earlier as she battled the debilitating effects of the flu.

It was a victory that seemed unlikely as she raged at allowing a lead to slip through her fingers in the second set against Lucie Safarova.

It was a victory that seemed unlikely 20 minutes earlier when Safarova had broken for a 2-0 lead in the third set.

Yet Serena is not considered one of the all-time greats for nothing and she screamed, shouted and roared her way to a 6-3, 6-7(2), 6-2 victory over the Czech 13th seed.

As Serena celebrated by raising both arms and looking skyward, her coach, Patrick Mouratoglou, held up two fingers with one hand and shaped an 0 with the other to signal her 20th triumph.

“It has been a nightmare 48 hours,” said the 33-year-old tennis superstar.

“When you have the flu, your whole body aches. That’s what I have been dealing with,” Serena added following a third Roland Garros victory which left her only behind Margaret Court (24) and Steffi Graf (22) on the list of leading major winners.

“It makes this trophy really special. I really wanted it. I wanted to win so bad.

“I can’t believe I won, but it’s cool,” added Serena after being presented with the trophy by fellow American Martina Navratilova.

The result also left her one Wimbledon trophy away from completing what she calls the “Serena Slam” — holding all four slams at the same time — for the second time in her career. She first achieved the feat in 2003.

Serena had an 8-0 record over Safarova going into the final, where one booming male voice sang out from the stands, “Serena’s on firrrrrre.”

But if Serena was feeling lousy as she battled the flu, it was nothing compared to the fury she felt when she surrendered two successive serves with double faults to lose four games on the trot.

At one point, obscenities flowed from her mouth — earning her a warning — while she angrily flung the official red and black tournament towels away from her chair.

The explosion had the desired effect as she channeled her anger to hit some audacious shots, including a left-handed forehand midway through a 19-stroke rally that she won.

The woman who had survived four three-set battles to reach the showpiece match — including a semifinal match against 23rd-seed Swiss Timea Bacsinszky — was determined to go the distance again.

Serena won the last six games to complete a remarkable triumph that looked nearly impossible at several stages of the tournament and was testimony to her sheer determination.