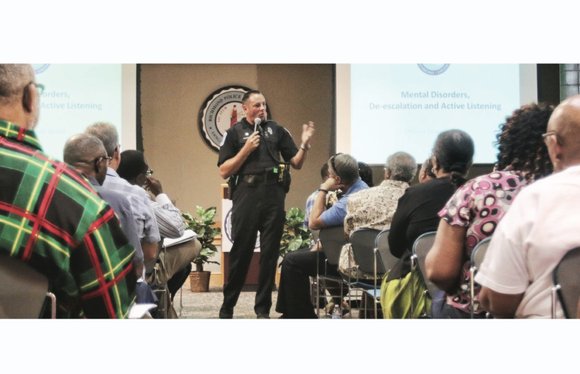 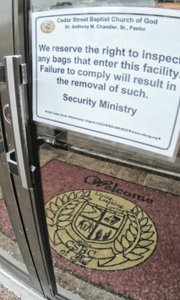 A sign at Cedar Street Baptist Church in the East End exemplifies the heightened interest in safety of worshippers.

Richmond area faith leaders and congregation members are on heightened alert following the mass killing of nine worshippers at a historic Charleston, S.C., church last week and a frightening incident that followed at a church in South Richmond.

More than 200 religious leaders, congregation members and others gathered Saturday at the Richmond Police Training Academy on North Side at the Places of Worship Safety & Awareness Forum for a discussion on how to keep their congregants safe.

They heard tips from police, security specialists and faith leaders on how to respond to shootings in houses of worship, how to handle persons with mental illness, measures to ensure crowd control and staffing during events and how to prepare for other emergency situations.

RPD officials scheduled the forum prior to the horrific June 17 killings of Pastor Clementa Pinckney, a South Carolina state senator, and eight members of historic Emanuel African Methodist Episcopal Church in Charleston as they attended a Bible study at the church.

Richmond Police Acting Deputy Chief Steve Drew and others at the forum observed 20 seconds of silence at the start to remember the Charleston victims.

They then listened to speakers, watched videos and discussed strategies designed to help prevent further incidents like that in South Carolina.

“What we do here today may not prevent an incident from occurring. But we believe the more prepared you are, and the more planning there is, you can decrease the probability of an event like this from happening and can prevent some of the carnage,” Deputy Chief Drew said.

Those in attendance agreed.

“Awareness, I think, is critical,” said the Rev. Calvin Duncan, pastor of Faith and Family Church in Chesterfield County, who attended the forum. “You want to be welcoming to people, but you still have to be mindful. These are just the days we are in.”

Rev. Duncan said his church pays a police officer to sit in a marked vehicle during both of the church’s worship services to ensure safety and to guide cars onto the street following services.

The importance of security in churches, mosques, synagogues and other places of worship was brought closer to home a day after the South Carolina massacre when police confronted a white man outside the predominately black United Nations Church International on South Side. He was beating on a door outside the church, yelling racial slurs and threatening the congregation during a church event, police said.

A police officer working security at the church in the 5200 block of Midlothian Turnpike pointed a gun at the man, thinking he had a knife. The man actually had a long piece of plastic he used to bang on the door, police said.

He was taken into custody and transported under an emergency commitment order to Tucker Pavilion at Chippenham Hospital to be evaluated. Police have not released his name.

Police said at the public safety forum that the incident is under investigation and charges may be pending.

Also at the forum, Richmond Assistant Commonwealth’s Attorney Janae Craddock said Virginia law allows people to carry guns into places of worship as long as they have the necessary permits.

She said religious leaders can ban guns from worship services, but would have to implement strategies such as bag searches and pat-downs to ensure they are kept out.

Other tips RPD offered for safety at places of worship included:

• Do security checks prior to services and other church functions.

• Have parking lot security to welcome worshippers and look for anything that might be out of the ordinary.

• Have an evacuation plan ready.

• Train church leaders in how to deal with unruly people.

Other churches ask those closest to the pastor — including family, friends and church leaders — to sit in rows close to the pulpit, to serve as a buffer between the pastor and possible trouble.

Separately, more than 20 pastors from predominately black churches met last Friday at World Overcomers Family Church in the East End, where church security was among the chief topics.

The church’s pastor, Dwayne Whitehead, who is the president of the James River Chapter of the Southern Christian Leadership Conference, said he carries a handgun at times, but it’s more for personal safety than church security.

“The first measure we have is to pray for the safety of the members and visitors who come to the church,” he said. “Next, we have people who help walk other people to their cars to ensure their safety, and we have people who keep on an eye on the parking lot.”

He said he considers the shooting in Charleston to be an isolated event.

“I think the positive response of the people from Charleston and around the country, where people came together, will have a powerful effect and will minimize the chances of this happening again. I don’t think this young man accomplished what he was trying to,” he said.

“We have a security group that watches over the inside and outside of the building during worship services and Bible study,” he said. “The mass killings make us conscious, but we are not changing anything.”