RVA Reads gives a book a month to pre-schoolers 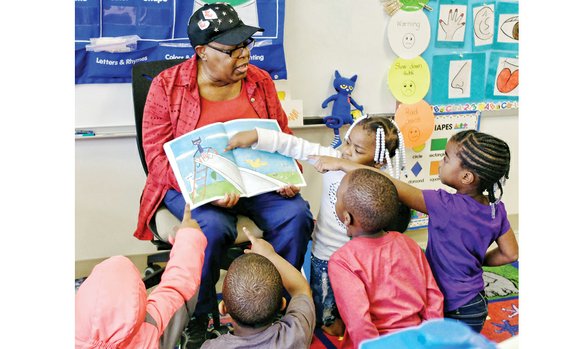 Where’s the cat? / Volunteer Inez Crews engages the attention and participation of pre-schoolers Tuesday at Dr. Martin Luther King Jr. Learning Center in the East End as she reads “Pete the Cat: Rocking in My School Shoes.” The book is part of the monthly read aloud and share program sponsored by RVA Reads. Each youngster will get a new book each month to take home and read and share with their families. Story on A6. Photo by Sandra Sellars

A city program is helping to put books into the hands of hundreds of Richmond’s youngest schoolchildren with the goal of exciting them about reading.

Called RVA Reads, the program distributes a new book each month to 3- and 4-year-olds, according to Michael Wallace of the city’s press office.

The children are enrolled in classes provided through Richmond Public Schools’ Virginia Preschool Initiative at Blackwell, Maymont and Mary Scott schools and at the Martin Luther King Jr. Preschool Learning Center. About 900 city children are enrolled in VPI, a state-supported preschool program that is similar to the federal Head Start, Title One and Developmentally Delayed programs, which separately serve more than 1,000 children in the city.

Book distributions like this one are not new, but most like One School, One Book at Oak Grove-Bellmeade Elementary, target children in third or fourth grade.

RVA Reads is a collaboration of RPS, the Richmond Public Library and the City of Richmond’s Office of Community Wealth Building.

The program allows children and their families to create or expand home libraries and is aimed at increasing the time parents spend reading to their children, Mr. Wallace stated. The program also seeks to encourage use of library services by encouraging parents and children to seek more books.

To introduce this month’s book, members of the city administration and volunteers held a reading event at one of the centers. This month, the reading event was held Tuesday at the Martin Luther King Jr. Preschool Learning Center.

The December selection will be a bilingual book, “El Libro de las Estaciones/ Book of Seasons” by Alice and Martin Provensen. Previous books included “The Snowy Day” by Ezra Jack Keats, “The Carrot Seed” by Ruth Krauss, “Caps for Sale” by Esphyr Slobodkina and “Pete the Cat: Rocking in My School Shoes” by Erik Litwin.

RVA Reads began as a pilot project earlier this year. It expanded this fall after Mayor Dwight C. Jones proposed and City Council approved additional funding for the program for all of the children enrolled in VPI classes.