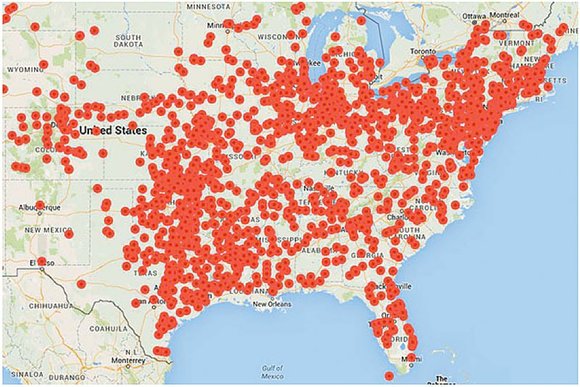 At a time when some presidential candidates are gaining support and headlines for bashing African-Americans, Mexican immigrants, Muslims and other groups, a historian in Richmond is using records of the Ku Klux Klan to show the public how easily bigotry can spread to every corner of the country.

The historian, Dr. John T. Kneebone, has created an animated map with the help of Virginia Commonwealth University Libraries that lets anyone with a computer learn how the Klan, the nation’s most infamous hate group, infiltrated every state during its heyday in the 1920s and 1930s.

The map, which tracks the Klan’s growth between 1919 and 1940, is available to every computer user at the following link: http://labs.library.vcu.edu/klan.

This is the first time that VCU’s digital librarians have worked directly with a faculty researcher to develop a digital visualization of their work, said Jimmy Ghaphery, head of digital technologies for VCU Libraries.

The map relies on the wealth of data Dr. Kneebone gleaned from Klan publications about the development of chapters or Klaverns.

“The project is using technology to demonstrate” how quickly the Klan’s growth happened, said Dr. Kneebone, an associate professor and chair of the 30-member VCU history department.

The map’s animation shows red dots, each representing a local Klan organization, spreading across the country like measles, said Shariq Torres, a web applications analyst for VCU Libraries who oversaw creation of the map.

At the time, “this organization’s ideas were so mainstream that people were fine with it,” Mr. Torres said. “They were fine with excluding black people. That trickles down to everything else — housing inspectors, cops, policymakers, bankers, education, everything.”

At its peak, Dr. Kneebone said, the KKK claimed between 2 million and 8 million members in 2,000 Klaverns before the national organization disbanded when the IRS sued for back taxes in 1944. Official membership had dwindled to less than 100,000 by then, he said.

Today, according to the Southern Poverty Law Center, Klan groups enlist fewer than 8,000 to 12,000 people willing to don the signature white robes and hoods and burn crosses. However, the Montgomery, Ala.,-based center notes that more than 1,600 other extremist groups — from neo-Nazis to skinheads — are actively recruiting and spreading white supremacy and racial division.

Dr. Kneebone said the map dispels the myth that the KKK was made up largely of Southern bigots as was the case after the Civil War when the Klan first developed and later during the Civil Rights Movement.

In the KKK that took root after World War I, Dr. Kneebone noted the map shows the first chapter located in Michigan and that New England, the Midwest and California, along with the South, were awash in Klaverns and members eager to join in spewing vile messages against the groups they reviled most in that period — black people, Jews and Catholics.

“This map shows that you can’t just say, ‘Oh, it was those crazy people in the South.’ The [KKK] was virtually in every community” in the 1920s, publicly flaunting its power in parades in Richmond and many other cities, said Dr. Kneebone.

“Everywhere there was significant population, there was the Klan,” Dr. Kneebone said. “Think about being a young person — black or Jewish or Catholic — growing up, knowing that these were everywhere.”

The KKK’s rise, Dr. Kneebone said, was fueled by the 1915 film, “The Birth of a Nation,” a fictional and highly racist depiction of Reconstruction “that portrays the original KKK, which operated between 1865 and 1871, as the saviors of white America.

“In class, I describe it as pornography for racists,” Dr. Kneebone said. “It’s a horrible movie.”

As a result of World War I, Dr. Kneebone said “the nation became fixated on the danger of immigrants, hyphenated Americans and disloyal people, which leads to a good deal of extralegal violence against dissenters. People were whipped, tarred-and-feathered, lynched. People were forced to kneel and kiss the flag.”

He said the KKK’s growth did foment a backlash. This is “the first time black Americans, Catholic Americans and Jewish Americans, work together” forming “the basis of the modern Democratic Party.”

Notably, opposition to the KKK and “The Birth of a Nation” was also a defining moment in the early days of the NAACP, he said.

“From the emergence of ‘The Birth of a Nation,’ the NAACP, which had been founded in 1909, had seen the movie as a base libel of black people and an evil film with a terrible, terrible message and fought really hard to have it banned in various cities,” Dr. Kneebone said. “In many ways, this was the making of the NAACP.”