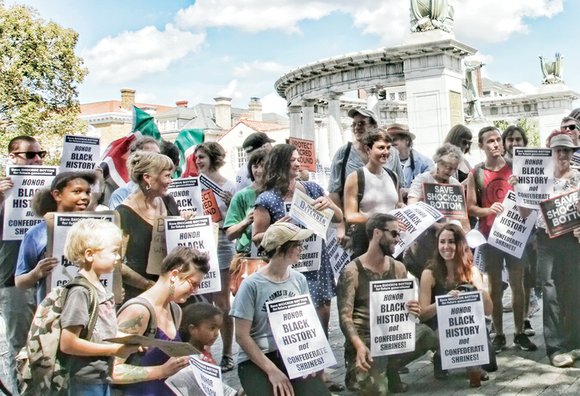 Demonstrators signal their displeasure Saturday with the international bike races route along Monument Avenue with statues of Confederates who fought to enslave black people. Photo by Sandra Sellars

As a small plane flew overheard carrying a banner with a Confederate battle flag and the message “Confederate heros (sic) matter,” cyclists from the Chilean and Mexican national bike teams pedaled up Monument Avenue on Saturday and turned at the statue of Confederate president Jefferson Davis to head back Downtown to finish their training course.

Except for the misspelled banner circling the area behind the plane and about 50 sign-waving protesters nearby at Monument and Davis avenues, few of the cyclists and fans from around the world knew that the cobbled street dotted with statues to vanquished Confederates was at the epicenter of a battle over culture, history and justice.

The protesters, a collection of community activists and historic preservationists, were rallying against the decision by organizers of the UCI Road World Championships to focus the international race’s routes along Monument Avenue — a street laden with statues of traitors — and along Shockoe Bottom, once a hub of the U.S. domestic slave trade and a graveyard for countless enslaved people who suffered at the hands of Confederates.

“We are here today to tell the world that most Richmonders do not support showcasing these monuments to Confederate military and political leaders during this world-famous sports event,” said Ana Edwards, chairwoman of the Sacred Ground Historical Reclamation Project of the Defenders for Freedom, Justice & Equality.

“At the very least, the route could also have included the one black person memorialized on Monument Avenue who actually fought racism — Richmond tennis champion and anti-apartheid activist Arthur Ashe,” she added to applause.

She also questioned why organizers with Richmond 2015 excluded from the race route the predominately African-American community of Jackson Ward.

Having cyclists go through Jackson Ward, an area once known as the “Harlem of the South,” would showcase true heroes, she said, such as civil rights attorney Oliver Hill Sr.; Maggie L. Walker, the first female founder and president of a bank in America; newspaper editor John Mitchell Jr.; and entertainer Bill “Bojangles” Robinson.

Queen Nzinga, 64, a retiree from Richmond Public Schools and a member of the Defenders for Freedom, Justice & Equality, said Monument Avenue “has caused so much discord.”

“Most people see it as a symbol of days gone by,” she said. “Instead of spotlighting the Confederates, we have present heroes and sheroes — Africans and Caucasians — that (race organizers) could have spotlighted.”

Rebecca Keel, a member of Southerners on New Ground, questioned the motives of city officials and race organizers in planning the routes.

“The fact the very route of this race highlights Confederate supporters over highlighting the history of black people and black resistance is an enormous signifier that the ruling class of this city does not support the work of black liberation,” she declared.

Groups at the rally, which included members of the National Trust for Historic Preservation, called on Mayor Dwight C. Jones and Richmond City Council to drop plans to build a small memorial at the former slave holding pen in Shockoe Bottom known as Lumpkin’s Jail.

Instead, they asked city officials and others to plan and develop a 9-acre Shockoe Bottom Memorial Park and Interpretive Center to tell the true story of Richmond’s role as the center of the slave trade.

“This concept fully commemorates Shockoe’s slave history and provides space for education, reflection and healing, while ushering in a pathway for Shockoe Bottom to become a source of economic development and heritage tourism that benefits all Richmonders,” said Erica Stewart of the National Trust for Historic Preservation. — JOEY MATTHEWS