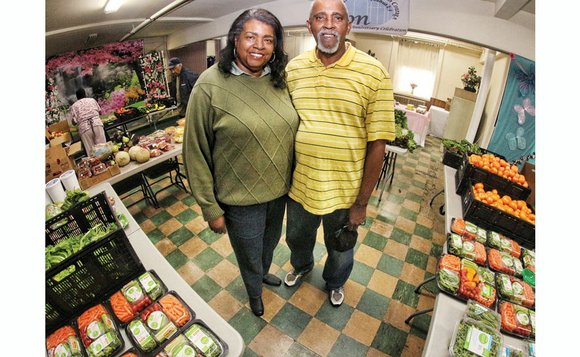 Betty and John Thombs display the fresh vegetables and fruits they collected from area stores on Tuesday. The food is given away in the social hall at Zion Baptist Church, 20th and Decatur streets, on South Side. The hunger-fighting couple has been quietly creating this pop-up food-giveaway stand daily for more than five years. Photo by Sandra Sellars

Boxes of tomatoes, peppers and other fruits and vegetables fill four tables in the basement social hall at Zion Baptist Church on South Side, creating the look of a small grocery store.

“This is a pretty small load,” said John Thombs, who had brought the cornucopia to the church at 2006 Decatur St., where his wife, Betty, set it up with a few helpers.

Shortly, people stream in and take what they want without charge.

“It’s a godsend,” said Linda Conyers. “I’m on a fixed income and this is a big help to me.”

Ms. Conyers is one of hundreds of people benefiting each week from the almost unnoticed and selfless volunteer effort of the Thombses, 68-year-old retirees on a mission to spread fresh produce and bread to Richmonders needing help with groceries.

Six days a week, the Thombses collect unsold food from area Kroger grocery stores and Prairie Grain Bread Co. on Midlothian Turnpike and take it the church where it is given to anyone who shows up between 4:30 and 7 p.m.

On the seventh day, Wednesday, the food the Thombses gather is distributed at New Generation International Ministries, 1515 Chamberlayne Ave.

And if items remain, the husband-wife team calls a contact at Mount Tabor Baptist Church in Church Hill to come and get it to make sure no food is wasted.

“Our children wonder why we’re doing this,” Mrs. Thombs said, “but it’s our calling,” an outward manifestation of their faith.

The Thombses are not alone in the fight against hunger in Richmond. Many people and organizations are engaged, ranging from the Central Virginia Food Bank and various churches with food pantries, to food growers such as Tricycle Gardens and 31st Street Baptist Church and those who feed the homeless at Monroe Park on weekends.

However, the Thombses stand out for their dedication to ordinary people needing a helping hand.

Mr. Thombs said he planned to do more fishing when he retired a few years ago, but instead the collection and distribution of food dominates his life. He got his start 15 years ago when he was still a city schoolteacher. A colleague who was picking up bread at Prairie Grains asked if he could take over.

For the first 10 years, he said he just picked up bread, though he said he often struggled to find places to deliver it.

He said a few years ago when he was feeling discouraged and thinking about giving up his effort, he said he heard a voice tell him, “You haven’t seen anything yet.”

Mr. Thombs believes God was speaking to him. Just a few weeks later, he was approached by the store’s produce manager about taking tomatoes and other produce. When the manager moved to another store, she asked Mr. Thombs to take produce from there, and so it went.

Seven days a week, Mr. Thombs travels in his 1998 Econoline van with 270,000 miles on it to pick up still-good produce that has been pulled from the shelves from four or five stores. Sometimes his wife is with him; sometimes it’s his neighbor and friend, John A. Puryear. And sometimes, he collects the food donations by himself.

“There is nothing wrong with the produce. It’s still fresh. It just doesn’t meet the store’s standards,” said Mr. Thombs.

The items used to be thrown away, but now Mr. Thombs is there each day to rescue the items for distribution to many appreciative people.

The floral departments at the stores now also have him take away flowers that have not sold that he distributes to several senior citizen apartment complexes, such as Guardian Place on North Hamilton Street.

In addition to the produce, he also collects up to 1,100 loaves of bread a week from Kroger and the Prairie Grain Bread Co., which he delivers mostly to senior housing communities.

Mrs. Thombs, a former schoolteacher who later worked for the state government for 10 years before retiring, is a full partner in the effort, he said.

She credits a small band of helpers who assist the couple, including Mr. Puryear, Candice Lacy, Jake Reed, Dorothy York and Connie Winston. Bessie Bartee also comes weekly to pick up some of the food to take to Buchanan County to help people there, Mrs. Thombs said.

Both also praise the Rev. Robert L. Pettis, pastor of Zion Baptist Church, and the congregation for allowing them to use the social hall.

How long will they keep doing this work?

“As long as our health holds up,” Mr. Thombs said. “People depend on us, and we can’t let them down.”