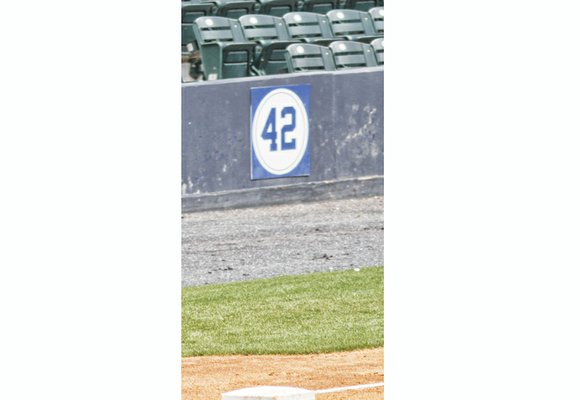 Each year the Flying Squirrels host Jackie Robinson Day at the Diamond. The baseball trailblazer’s No. 42 has a permanent home in right field. Photo by Sandra Sellars

“I had a good time tonight,” Bobby Brown said to his family as they left The Diamond after attending a recent Richmond Flying Squirrels baseball game.

“I had never been to a baseball game before,” the Brooklyn, N.Y., resident told the Free Press.

But this was a special outing.

His sister, Michelle Jackson, bought the game tickets after her daughter, Emeriah, a student at A.P. Hill Elementary School in Petersburg, was awarded a ticket to the game for reading so many books in the Flying Squirrels’ Go Nuts for Reading! Program.

The program is one way the Flying Squirrels are reaching out to the African-American community while increasing attendance.

Todd “Parney” Parnell, vice president and COO of the Flying Squirrels, said the team has made great strides in connecting with the African-American community. In addition to the rewarding reading program, the team makes promotional visits to Richmond Public Schools, Virginia Union University, Virginia State University and other city groups.

He said minor league baseball officials also are pushing not only to draw more fans of color, but also to hire more minorities in team offices and at ballparks.

But, Parney said, more work needs to be done.

“It’s about developing relationships with people and eventually connecting with them so they will want to be a part of what we’re doing here at The Diamond and in the community,” he said.

One such relationship bore fruit when Parney partnered with William Forrester Jr., executive director of the Richmond-based Metropolitan Junior Baseball League for inner-city youths, to host the MJBL’s annual Inner-City Classic and Black World Series at The Diamond in 2012 and 2013.

Additionally, the Squirrels are entering the fourth year of a partnership with the youth baseball organization in which MJBL’s players compete against their suburban counterparts in the Flying Squirrels Regional Youth Championship.

“It lets our players see that caliber of competition, and to see where those players play some of their games. And it brings the community together,” Mr. Forrester said.

“They are inclusive,” Mr. Forrester said of Parney and the Flying Squirrels. “They make sure that they’re reaching all the kids in a manner that would be attractive to them.”

Mr. Brown and his family were among several hundred African-Americans in the crowd of 9,500 fans at the Squirrels’ Jackie Robinson Day game on April 15. Like many major league teams, the Squirrels were celebrating and honoring the late trailblazing player who, in 1947, broke baseball’s color barrier when he was signed to play for the Brooklyn Dodgers.

Mr. Robinson wore No. 42. On Jackie Robinson Day, the Squirrels gave away T-shirts with that number. A permanent sign saluting Mr. Robinson is in right field at The Diamond, and a plaque etched with No. 42 is near the home team dugout.

The sign and plaque are tangible reminders of Parney’s partnership — and friendship — with the late Free Press Editor/Publisher Raymond H. Boone, who sought local recognition for Mr. Robinson.

Parney believes some of the efforts are paying off. At a recent community meeting sponsored by the City of Richmond, he said an African-American woman stood to inquire where a new ballpark would be built. He said he was thrilled when she shouted, “These are our Squirrels!”

Still, Victoria Parrish, 56, who attended a recent game with her granddaughter, Jamya Dawkins, a ticket-winning reader from Henrico County’s Glen Allen Elementary School, said cultural preferences may be keeping some African-Americans away from the ballpark.

But “our culture, I think, sometimes pays more attention to football and basketball” and other fast-paced sports, she said.

Mr. Brown laughed when he was asked by a Free Press reporter to assess his experience at The Diamond.

“There were a lot of Squirrels going around,” he said, referring to team members and the Squirrels’ mascots “Nutzy” and his new pal “Nutasha.”

“It was a lot of fun watching them play and hanging out with my family,” he said.