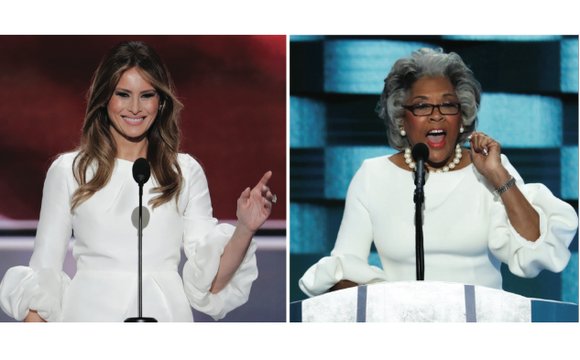 Congresswoman Joyce Beatty, right, delivers a speech in her own words at the Democratic National Convention in Philadelphia on July 28 in a dress very similar to the dress worn by Melania Trump, left, during her plagiarized speech at the Republican National Convention on July 18. J. Scott Applewhite/Associated Press

As soon as Ohio Congresswoman Joyce Beatty stepped off the stage following her July 28 address at the Democratic National Convention, Twitter blew up.

“I am irrationally delighted by this,” replied another.

“My husband bought me the dress and asked me to wear it,” she said.

She said while she knows about the Trump debacle, she hadn’t watched Melania Trump’s speech and didn’t know what Mrs. Trump was wearing.

Asked about the resulting social media comparison about who wore the dress best, Rep. Beatty said: