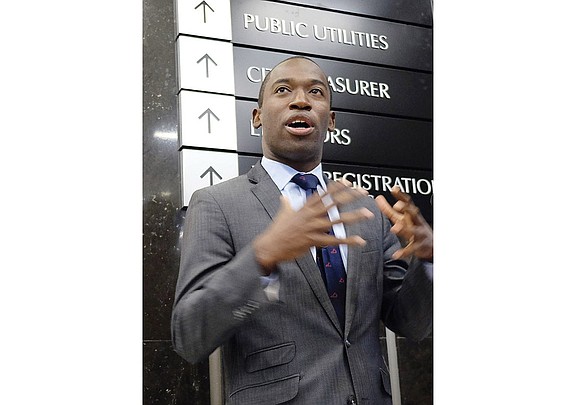 Mayor-elect Levar Stoney is drawing on people from business, education, government and other backgrounds to help him make the transition to Richmond’s chief executive post.

The day before Thanksgiving, he released the complete list of the 41-member transition team he has named to help him prepare to take office Sunday, Jan. 1.

Along with the previously announced co-chairs and director, he announced the names of 38 others, including three presidents of universities and two members of the General Assembly.

“Levar is committed to bringing the public, private and nonprofit sectors together, and this is what he is doing,” said Matt Corridoni, spokesman for Mr. Stoney and his likely press secretary.

According to Thad Williamson, a University of Richmond associate professor and director of the transition, the full committee has been broken into three subcommittees.

One is to help Mr. Stoney organize his office at City Hall; another is to come up with policy recommendations based on promises Mr. Stoney made on the campaign trail; and the third is to review the management and operations of city agencies, Dr. Williamson said.

He said the work of the transition team is likely to continue well into next year because the subcommittees will not complete their work before Mr. Stoney takes office.

However, Dr. Williamson, as well as Mr. Corridoni, declined to list the members of the subcommittees, telling the Free Press the information is not being disclosed for the time being.

Dr. Williamson said disclosure of the subcommittee members’ names could bring attempts to influence the members.

“This is an advisory committee” that has no official standing and it was felt that it would be inappropriate for the members to be bombarded with emails while trying to assist Mr. Stoney, he said.

Here is the list of the transition members, based on their background and experience:

Delores L. McQuinn, Richmond representative in the House of Delegates