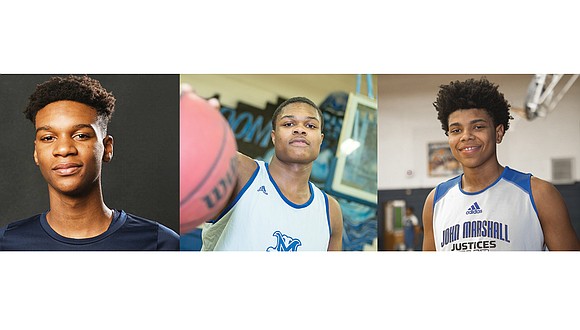 Surprisingly, the Richmond area’s tallest basketball team might represent a high school rather than a college.

John Marshall High School’s front line just may have an inch or two over the likes of Virginia Commonwealth University, the University of Richmond and Virginia Union University.

Their high altitude already has inspired such nicknames as the “Blue Forest” and “Tree-mendous Trio.”

“It’s certainly the tallest team I’ve had since I’ve been here,” said the Justices’ eighth-year Coach Ty White. “But we don’t have to pound it inside. Our bigs are versatile enough to play fast or slow.”

Here are some early assessments:

Isaiah Todd: Among the nation’s top prospects from the Class of 2020, the transfer student from Baltimore seems more comfortable facing the basket than posting up.

“Isaiah is fluid and skilled, but still a work in progress,” said Coach White. “He needs to improve on his physicality.”

Isaiah Anderson: The 240-pound Anderson doubles as football quarterback and likely will opt for the gridiron in college.

In a strange set of circumstances, Anderson played basketball and football for John Marshall last year, then transferred to Benedictine, where he played football this past fall.

Now he’s back on the North Side.

“Greg has always been a physical kid with a nose for a ball. But now he’ll be able to play the 3 (wing forward) at JMU.”

And then there’s John Marshall High’s “coach in the stands,” the venerable Carl Peal.

“Coach Peal critiques me after our games,” said Coach White. “In fact, he even offers tips before the game after watching the other team warm up. He’ll say something like, ‘Better watch No. 24; He’s got the hot hand.’ Coach Peal is still coaching me.”

Coincidentally, John Marshall ninth-grader Todd may be the most ballyhooed big man to debut in the area since Malone broke in with Coach Peal’s Crimson Wave nearly five decades ago.