Fellowship with heaps of food 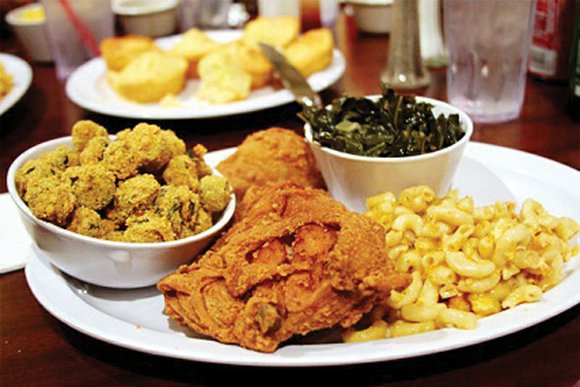 This plate is loaded with the typical tasty, high-calorie comfort food served at many African-American churches.

Special to the Trice Edney News Wire from NorthStarNewsToday.com

After the Fourth Sunday of Advent Service in December, members and guests of St. Martin’s Episcopal Church, a mostly African-American church on Chicago’s West Side, celebrated by hosting a special Advent brunch.

And special it was. Spread out on two long tables in a second-floor room between the kitchen and the pastor’s office were big aluminum pans of ham, turkey, fried chicken, spaghetti, mashed potatoes, gravy, slices of white bread, salad, salad dressings and collard greens. For dessert, there was peach cobbler and several varieties of cookies, along with hot coffee, tea, sodas and water.

Church members sat in folding chairs, balancing their plates on their laps, eating, talking and laughing, often going for seconds. Some members ate in a back room where there was a table.

Father Christopher Griffin, St. Martin’s pastor, held a plate overflowing with food in one hand. His stomach sticks out well over his belt buckle. When asked if he was concerned about his weight, he said, “Sure, I’d like to lose weight. Doesn’t every American?”

The gathering went on for several hours before members, who also include Asians, Hispanics and white people, washed the plates, pots and pans before cleaning the kitchen to go home.

There was so much food, church members saved the leftovers for the dinner that would be served after the Christmas Eve service. In addition to the special meals, there’s coffee hour, which is held most Sundays. Large amounts of food are also served at coffee hour.

Dinners served after church services have been used by some to explain the high obesity rates among black people. At the same time, the calorie-laden dinners also provide fellowship for African-Americans, a sense of easy community they may not experience elsewhere during the week, particularly given the prevalence of racially motivated slights, the tense anticipation of slights, or worse, the possibility of violent physical assault.

African-American men and women who eat high-fat comfort foods, such as macaroni and cheese, register higher rates of obesity than most other groups in the United States. These men and women, however, took different paths on the road to excessive girth. In both cases, many African-Americans end up suffering from such debilitating physical ailments as diabetes, high blood pressure and heart disease that shorten their lives compared with other racial and ethnic groups.

African-Americans eat high-fat foods as a way to reduce stress, which comes from living in poverty and residing in neighborhoods with inadequate housing and high crime rates, said Dr. James S. Jackson of the Institute for Social Research at the University of Michigan, during a seminar at November’s Gerontological Society of America conference held in Orlando, Fla.

He explained that even middleclass or wealthy African-Americans suffer from daily microaggressions — subtle or not so subtle racist insults — in which they are unjustly viewed as thieves or suspected criminals because of their skin color.

Women clutch their purses in fear when they see black men. Armed security guards follow black male shoppers throughout stores believing black men may be there to steal, not to shop. A cop in a retail store gripping the butt of his gun at the sight of a black man who is minding his own business sends an unambiguous message of threat.

“Many black Americans live in chronically precarious and difficult environments,” according to the study “Race and Unhealthy Behaviors: Chronic Stress, the HPA [hypothalamic pituitary adrenalcortical] Axis and Physical and Mental Health Disparities Over the Life Course.”

Dr. Jackson and co-authors Dr. Katherine M. Knight and Dr. Jane A. Rafferty wrote, “These environments produce stressful living conditions, and often the most accessible options for addressing stress are various unhealthy behaviors, e.g., smoking, drinking, drug use and so on.”

They continue, “These unhealthy behaviors may have a salubrious effect by helping stave off mental health disorders among some race groups.” But, they found, those behaviors combined with stressful living “create large physical disparities that are unfavorable to Blacks.”

Black women often reduce stress by overeating comfort foods, beginning at an early age, largely because they are encouraged to do so by their mothers, female relatives and friends.

“Overeating is an effective, early, well-learned response to chronic environmental stressors that only strengthens over the life course,” Dr. Jackson said.

African-American women may not exercise because they don’t want to mess up their hair. It is expensive to have it straightened and styled with a hot curling iron. White women, on the other hand, can wash and blow-dry their hair daily and usually do this without the assistance or the expense of a hair stylist.

African-American men, however, begin exercising at a young age to maintain their strength and weight. If they become competitive athletes, they have opportunities to win college scholarships and possibly play professional sports.

However, when they reach middle age, they gain weight because their bodies begin to break down, making exercise much more difficult. Unable to exercise as they did when they were younger to reduce stress, the men smoke cigarettes, drink alcohol and self medicate with illegal drugs.

Middleage black men are not the only ones who are smoking, drinking and using illegal drugs in growing numbers. These behaviors are occurring with much greater frequency with lowerclass white women, especially in rural areas, because they have been pushed out of traditional low-wage jobs that require little to no education, Dr. Jackson explained. Those jobs often go to cheaper migrant labor.

The Sentencing Project, a Washington-based think tank concerned with judicial reform, reported that the numbers of white women sentenced to prison rose 48 percent from 2000 to 2009.

In Ohio, for example, white women, many from the state’s rural areas, are the fastestgrowing population in Ohio prisons, according to state records.

The growth in the use of methamphetamines and opioids has gotten the attention of Congress, which at one time wanted to lock up inmates and throw away the key when most, if not all, were black men. With hard drug use spreading now among the white middle class and in rural areas, congressional support is growing for declaring drug abuse a health issue.

“This shows you how policy blinds you to what is going on in front of your face,” Dr. Jackson said.

According to the U.S. Centers for Disease Control and Prevention, 37.9 percent of black men age 20 and older were obese from 2009 to 2012, compared with 57.6 percent of black women during the same time period. Obesity, a medical term, is characterized by excess body fat. It is calculated based on a person’s height and weight, according to the National Institutes of Health, Dr. Jackson said.

“This is a very complicated issue,” he explained. “You have the perfect storm factors. You have gender and cultural issues. Girls learn this behavior from their mothers who often eat big meals following Sunday church service or even daily. In so doing, mothers signal to their daughters it’s OK to be overweight.”

In the critically acclaimed 2014 movie “Top Five,” starring comedian Chris Rock, the character “Silk,” played by actor J. B. Smoove, constantly hits on heavyset black women. Silk, who complains that women who are trim are too skinny for him, even targets a policewoman, whom he suggestively urges to lock him up. When Silk sees another obese black woman, he says, “Ooh. I love a big girl. You move with a lot of confidence.” A big smile lights up her face. Such incidents are taken from real life and inevitably make their way into reel life.

Sunday church dinners provide fellowship for African-Americans, refuge from a world where feeling accepted is not always possible. A half-century after the Civil Rights Movement sit-ins, African-Americans may not be served in Chicago restaurants or may receive poor service to discourage their return. This Chicago-based reporter was turned away from a local restaurant, even though there were plenty of empty tables. And I was placed in a seating area with no waitress service at another restaurant. The hostess wanted me to leave. I did.

But black churches, along with their big meals, provide a place for fellowship, a custom that began in slavery. People are welcomed.

“Sunday was the only day blacks were free. At church, black people were somebody. They held positions in the church, such as deacon. They were honored and welcomed,” Father Griffin said. “They then sat down to eat and enjoy their day.”