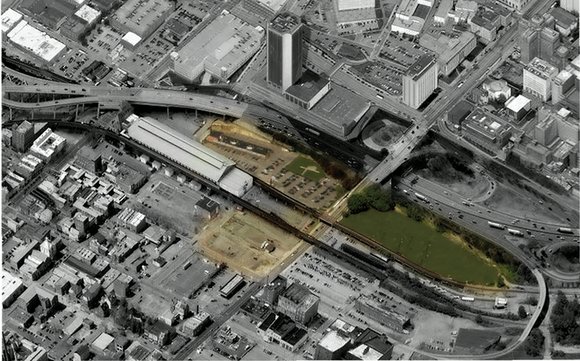 The push to create a memorial to slavery in Shockoe Bottom took another step forward this week as national groups joined with local activists.

The National Trust for Historic Preservation and Dr. Max Page of the University of Massachusetts Center for Design Engagement are collaborating with the Sacred Ground Historical Reclamation Project to hold a series of community meetings this week that will culminate in a new and sharper proposal for the Shockoe Bottom slavery memorial.

The groups will reveal the proposals 5:30 p.m. Friday, June 3, at the Black History Museum & Cultural Center of Virginia, 122 W. Leigh St., in Richmond’s Jackson Ward. The meeting is open to the public.

“This is not just a local Richmond story. It’s also compelling as a national story,” said Dr. Page. “I think it is probably the most important undiscovered or untold site about slavery and its lasting impact up to the present.”

Others agree. The National Trust for Historic Preservation has named Shockoe Bottom “a national treasure.”

“A unique part of American history happened at Shockoe Bottom and it has nearly been forgotten,” said Rob Nieweg, senior field director and attorney for the national trust. “Shockoe Bottom should be treated as a site of conscience, a place where modern-day discussions can go on about the legacy of slavery and the things impacting our communities today. We see it both as an extremely important place for the past but also for its role in the future.”

The Massachusetts group started the process with plans previously generated by the Sacred Ground Historical Reclamation Project for the area in Shockoe Bottom that stretches between Interstate 95 east to the CSX Railroad tracks and train shed behind Main Street Station.

Activists are looking to create a memorial park on the 9-acre tract, which includes the Lumpkin’s Jail site, where thousands of enslaved people were held while being bought and sold, and the African Burial Ground that also held the Town Gallows where slave rebellion leader Gabriel was executed.

Two-thirds of the proposed park area already has been set aside by the city for a memorial. The national trust is suggesting addition of two square blocks east of the railroad tracks, between East Broad, 17th and East Grace streets.

The city has plans to revitalize 6 acres that includes Lumpkin’s Jail and the slave trail under the Richmond Slave Trail Commission. A larger plan for the area, proposed by Mayor Dwight C. Jones that included commercial development and a baseball stadium, collapsed under public opposition.

The key issue that worries advocates is whether there will be protections against commercial development around the site, which advocates want to remain reverent and respectful of the hundreds of thousands people whose lives were impacted by the slave trade.

Scores of slave trade and auction houses were in the Shockoe Bottom prior to the Civil War when Richmond’s slave trading industry ranked second only to New Orleans. Between 300,000 to 350,000 enslaved people were sold out of Virginia to support the cotton, tobacco and sugar cane industries.