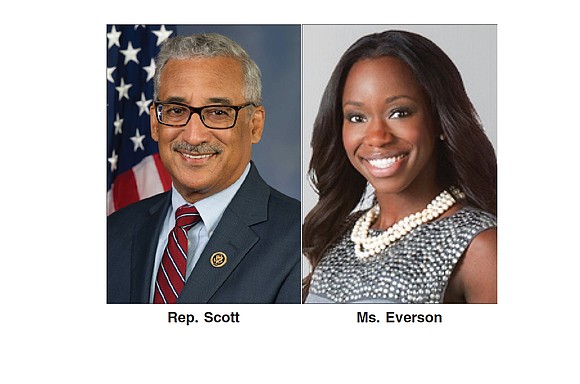 She sought to drop a bombshell.

Instead, Marsheri Reese Everson appears to have completely fizzled with her claim that veteran Virginia Congressman Robert C. “Bobby” Scott, D-3rd, sexually harassed her when she worked in his office more than four years ago.

Since Ms. Everson leveled the charge last Friday in the company of a Republican attorney and lobbyist known for embracing conspiracy theories, doubt has been raised about her credibility.

Meanwhile, Rep. Scott has denied the allegations. And women who have known or worked with the Newport News congressman through the years have rushed to defend his reputation.

Ms. Everson, a 32-year-old non-practicing lawyer who self-published a book on sexual harassment in 2015, claimed during a news conference that Rep. Scott propositioned her for sex and touched her inappropriately as she worked in his office through a Congressional Black Caucus Foundation fellowship.

She said that she quickly “fled” his office to get away, but ended up being fired from a later fellowship position with a congressional committee and blackballed for refusing the advances.

But since 2015, Ms. Everson has told at least three different versions of events. In her book, she did not identify Rep. Scott, stating simply that a congressman made an inappropriate comment but never touched her.

In a recent TV interview, she spoke about being propositioned, but said nothing about being touched.

In a press conference last week with attorney Jack Burkman, the GOP lobbyist, she claimed that she was propositioned and touched inappropriately.

As importantly, the congressman’s calendar for May 20, 2013, the date Ms. Everson alleges that he propositioned her, shows Rep. Scott spent much of the day away in Newport News and then returned to Washington to manage two bills on the floor of the House of Representatives and attend a heritage event.

Despite Ms. Everson’s claim, she did not present any evidence that they were alone together on that day, nor did independent evidence turn up suggesting they were.

The Free Press also has obtained information that belies Ms. Everson’s claim that she was fired from the House Financial Services Committee for failing to accept Rep. Scott’s advances.

Instead, the information strongly suggests that she was let go because of poor performance.

The latest in a parade of elected officials, public figures, movie stars and others to be hit with an accusation of sexual misconduct, Rep. Scott quickly branded Ms. Everson’s story as false.

“I have never sexually harassed anyone in my 25 years of service in the U.S. Congress, or in my 40 years of public service, or at any other time,” stated the 70-year-old dean of the Virginia delegation to Congress in a statement released after Ms. Everson’s news conference.

“Sexual harassment and assault are serious issues deserving of critical attention and review,” Rep. Scott continued. “No one should be subjected to sexual harassment or be treated unfairly. I have fought to promote and ensure that in my political and professional life, and I live by it personally.”

Rep. Scott, a Harvard University and Boston College Law School graduate, served in the Virginia House of Delegates and state Senate for 15 years before his election in 1992 as the first African-American to represent Virginia in Congress since 1890.

In Facebook posts and in comments to the Free Press and other media outlets, scores of people have expressed certainty that Ms. Everson is more a fabricator than a truth teller.

Typical was the outrage of Beverly Davis, an educator who has worked with Rep. Scott for 38 years through the Richmond chapter of the nonprofit Continental Societies Inc., which hosts an annual gala to raise money for scholarships and other programs.

She said she was “shocked” when she heard about the accusation.

“There is no way, no how that this is true,” Ms. Davis said. “There has never been a hint of anything like that. And it’s not just me. I know 200 women who have had regular contact with him for one reason or another, and no one has ever had a bad word to say about him. It’s just horrible that anyone would make such a charge against a good man. I am just sick about it. What is the world coming to?”

Ms. Everson came to Rep. Scott’s office in September 2012 after receiving a fellowship from the Congressional Black Caucus Foundation, which offers the program with the aim of helping young African-Americans gain experience on Capitol Hill by working in congressional offices and with committee staffs. The goal of the program is to boost the number of African-Americans working as staffers on Capitol Hill.

Interested in issues involving agriculture and energy, Ms. Everson was accepted to work in Rep. Scott’s office for 10 months and then was to find a position with a congressional committee for an additional 10 months.

The 2006 graduate of Michigan State University who had earned her law degree from DePaul University College of Law had come from Chicago, where she previously had a private legal practice and also had worked for the city’s investigative Inspector General’s Office.

At the time she headed to Washington, she dropped a $50,000 lawsuit she was pursuing in which she claimed she was fired from Chicago Inspector General’s Office after rejecting the sexual advances of a female supervisor.

In Rep. Scott’s office, Ms. Everson researched legislative matters, and makes no claim that anything untoward happened September 2012 and early May 2013.

According to emails the Free Press obtained between Ms. Everson and other mostly female staff in Rep. Scott’s office, she never raised any concern about the atmosphere in the office or the congressman’s behavior toward her.

Instead, between April 2013 and June 7, 2013, when she left, the email messages largely focus on her efforts to join a congressional committee for the second half of her fellowship.

The emails also undercut her claim that she “fled” the office because something had happened to her. For example, she organized a “So Long, Reese” party for the office on June 6, 2013, as she prepared to leave, a few weeks before the 10-month deadline.

On June 11, she wrote an email to a contact at the CBC Foundation expressing concern that she left Rep. Scott’s office too soon. She states that she left because she was optimistic about receiving an offer to work with the Senate Agriculture Committee, only to find that the offer did not materialize.

“I hope I have not burned a bridge with (Rep. Scott’s office) by not giving them a full two weeks notice,” she stated in the email.

She wound up getting a position with the House Financial Services Committee, whose ranking Democratic member is Congresswoman Maxine Waters of Los Angeles, another CBC member.

In August 2013, two months after going to work for the committee, Ms. Everson sent a warm email to Rep. Scott’s office offering thanks for the opportunity to work there and for the experience she gained.

While CBC Foundation officials declined to provide any comment on Ms. Everson or her work on Capitol Hill, information provided to the Free Press indicates that Ms. Everson struggled in the job and was let go from the committee and the CBC Foundation fellowship in December 2013.

Ten months later in October 2014, the Free Press has learned, Ms. Everson began claiming that her departure from the CBC Foundation fellowship was linked to alleged sexual harassment. At that point, she claimed that her harassment involved only “unwelcome” sexual comments.