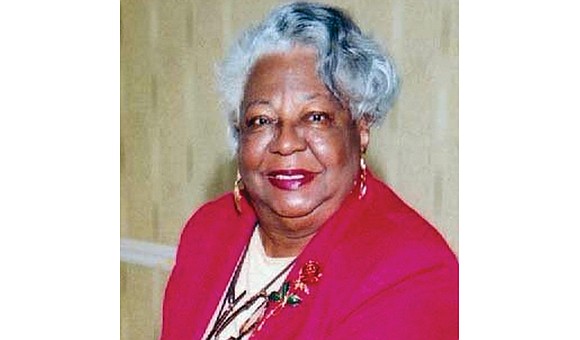 Dr. LaVerne Charmayne Byrd Smith had a passion for education and writing.

On the education front, she touched thousands of students and educators as a schoolteacher, university professor and reading specialist for the state Department of Education in a career that spanned 47 years.

She prided herself on being a “teacher of teachers,” her family said.

As a writer, she penned a column for a Richmond newspaper, authored books of poetry and led the creation of a two-volume history of First Baptist Church of South Richmond, one of the Richmond area’s oldest African-American churches.

Final tributes were paid to her Friday, Feb. 3, at First Baptist, where she served for a decade as the church’s historian and years earlier sang in the chorus and played the trombone in the Sunday School Orchestra.

Dr. Smith grew up in Richmond and followed her two sisters, Elizabeth B. York and Geraldine B. Story, into education after graduating from Virginia Union University. She later earned a master’s degree from Virginia State University and a doctorate from the University of Maryland.

In 1974, she joined the Virginia Department of Education, becoming the state supervisor of reading and language development. She also ran annual conferences on reading for 11 years before she retired in 1991.

She became a published writer at age 12 when she teamed with her sister, Elizabeth, on a column called the “Younger Set” for the Richmond Afro-American newspaper. For six years, beginning in 1939, they wrote about the birthdays, parties and activities of the city’s African-American youths. After retiring as an educator, she resumed writing columns for the newspaper from 1993 to 1996.

She also served as historian for First Baptist from 1991 to 2001 and led a committee in writing and publishing “Traveling On” to tell the story of the church that was founded in 1821 in Manchester, which was later annexed by Richmond from Chesterfield County.

Her greatest joy was writing poetry and booklets, which she published, including “The Blessed Gentle Beast,” “Poetry for Growing: Kindergarten through Kollege,” “Poems of Indignation: Revisiting 20th Century Civil Rights and Black Awareness Movements,” “Pokey the Playful Whale,” “Virginia: This is Your Life 1907-1970” and “School Desegregation Crisis in Virginia.”

She also was active in civic affairs, including serving on the boards of J. Sargeant Reynolds Community College, the Urban League of Greater Richmond and the Richmond Branch NAACP.

She also was a past president and longtime member of the Upsilon Omega Chapter of Alpha Kappa Alpha Sorority, and held officer positions in such groups as Phi Delta Kappa, an international association for professional educators, and the Virginia Council on Human Relations.

She also was a member of the Richmond Area Reading Council, the Virginia Museum of Fine Arts, the Greater Richmond Chapter of the Afro-American Historical and Genealogical Society, the Black History Museum and Cultural Center of Virginia and the New York Public Library’s Schomburg Center for Research in Black Culture.

She also belonged to the Richmond Chapter of the Continentals Society.

Dr. Smith also sought to broaden her horizons with travel to Europe, Africa, the Caribbean and parts of the United States.

Among her awards was her selection in 1995 as a YWCA Woman of the Year, an award her two late sisters previously won.

Dr. Smith was the widow of Lewis “Jackrabbit” Smith, a former track star and coach who was inducted into sports halls of fame at VUU and Prairie View A&M University.