Face of Lady Liberty is African-American for first time on U.S. coin 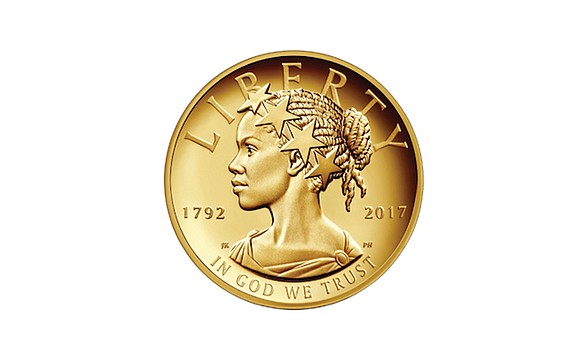 The U.S. Mint has unveiled a $100 gold coin featuring an African-American woman as the face of Lady Liberty for the first time in the history of U.S. currency.

The 24-karat gold coin, which marks the Mint’s 225th anniversary, debuted on Thursday, Jan. 12, in the U.S. Department of the Treasury’s Cash Room in Washington.

It is the first in a series of gold coins featuring Lady Liberty as a woman of color, Mint Principal Deputy Director Rhett Jeppson said in a statement.

Lady Liberty has been used on American coinage since the late 1790s.

Other editions will use designs representing Asian, Hispanic Americans and others “to reflect the cultural and ethnic diversity of the United States,” Mr. Jeppson said.

“We boldly look to the future by casting Liberty in a new light … looking forward to ever brighter chapters in our nation’s history book,” Mr. Jeppson said.

The coin’s heads-side design by artist Justin Kunz depicts the profile of Liberty wearing a crown of stars with the inscriptions “Liberty,” “1792,” “2017” and “In God We Trust.”

Depicted on the reverse side, which was designed by Chris Costello, is an image of an eagle in flight. The inscription on the eagle side includes the nation’s motto, “E pluribus unum,” which translates to English from Latin as “Out of many, one.”

Phebe Hemphill and Michael Gaudioso, both based at the Mint’s Philadelphia facility, sculpted the coin.

The Mint, which is the nation’s only manufacturer of official coinage, is set to release the initial coin design on April 6. It will be issued biennially.