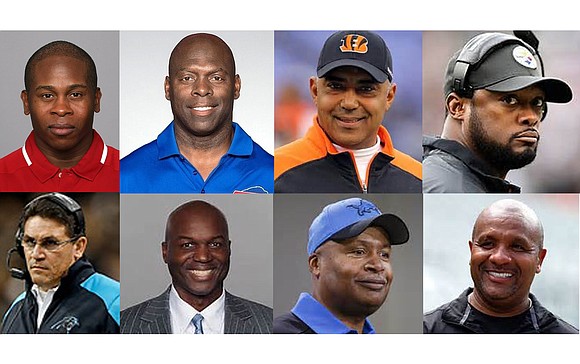 The Rooney Rule seems to be working, albeit slowly.

It seems likely the NFL will start the fall 2017 season with eight minority head coaches, seven of whom are African-American.

New additions to the 32-man fraternity are Vance Joseph with the Denver Broncos and Anthony Lynn with the new Los Angeles Chargers, formerly the San Diego Chargers.

Five coaches were fired and one retired during the 2016 season, all of whom are white.

Joseph and Lynn join Marvin Lewis of the Cincinnati Bengals, Hue Jackson of the Cleveland Browns, Jim Caldwell of the Detroit Lions, Todd Bowles of the New York Jets and Mike Tomlin of the Pittsburgh Steelers as the NFL’s African-American coaches.

The Carolina Panthers’ Ron Rivera is Latino; he is the son of a Puerto Rican father and a Mexican-American mother.

The Rooney Rule was implemented in 2003 following questionable firings of African-American coaches Tony Dungy in Tampa Bay and Dennis Green in Minnesota.

African-Americans make up about 70 percent of the NFL’s active players.

The 44-year-old Joseph, a former University of Colorado quarterback, was defensive coordinator for the Miami Dolphins during the 2016 season after serving two previous seasons as defensive backs coach for Cincinnati.

Joseph played two seasons in the NFL as a defensive back — in 1995 with the New York Jets and in 1996 with the Indianapolis Colts.

Lynn, 48, is a former Texas Tech running back who was offensive coordinator during the 2016 season with the Buffalo Bills. He was head coach during the final game of the season following the firing of Rex Ryan.

By far, the most successful current African-American coach is Tomlin, a native Virginian who has a 103-57 mark in Pittsburgh with a Super Bowl triumph in 2008 and seven playoff seasons since 2007.

Just 44, Tomlin was born in Hampton and starred as a defensive back at Denbigh High School and the College of William & Mary.

His father, Ed Tomlin, was a standout player at Hampton University in the 1960s and was drafted by the Baltimore Colts.

Only Bowles has an affiliation as a player or coach with historically black colleges and universities. Bowles played at Temple University but started his coaching career at Morehouse College in Atlanta in 1997 and Grambling State University in Louisiana in 1998-99.

In the NFL modern era, there were no African-American head coaches until the Los Angeles/Oakland Raiders hired Art Shell in 1989. Shell became a Hall of Fame offensive lineman for the Raiders following a college career at the former Maryland State College.