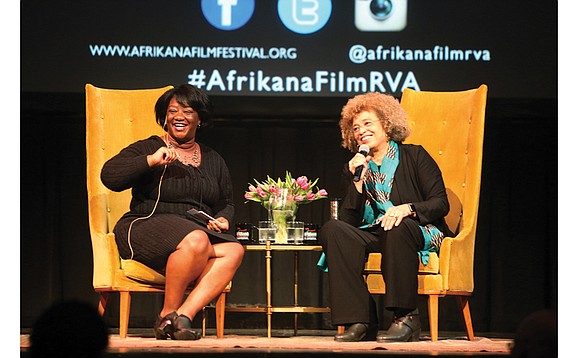 The election of Donald Trump as the nation’s 45th president “was the future we really dreaded,” said scholar and activist Angela Y. Davis.

His campaign slogan, “Make America Great Again,” was merely code for “make America white supremacist again,” she said. “We have to resist and prevent the Donald Trump project from reaching its realization.”

Dr. Davis, now a distinguished professor emerita at the University of California-Santa Cruz, made her remarks to a packed audience at the Virginia Museum of Fine Arts last Friday, where she energized the multiracial, multigenerational crowd.

She was in Richmond for a series of engagements that culminated with the Afrikana Independent Film Festival’s 2nd Annual “Evening with an Icon” held at the VMFA. 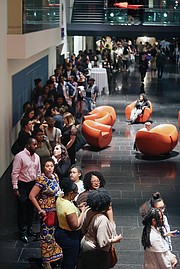 The event at the Virginia Museum of Fine Arts was sold out, with lines of people waiting to get in to see Dr. Davis and the documentary about her life, “Free Angela and All Political Prisoners.”

The event, co-sponsored by Virginia Commonwealth University, Croaker’s Spot restaurant and artist S. Ross Browne, featured a screening of the documentary, “Free Angela Davis and All Political Prisoners,” followed by a conversation between Dr. Davis and Tressie McMillan Cottom, an assistant professor of sociology at VCU.

“Black people must understand that this is an attack on all of us,” Dr. Davis said of President Trump’s rhetoric and policies.

“Racism is racism. And the Islamophobia that we’re witnessing now is growing on the terrain that has been created by so many decades and centuries of anti-black racism and anti-indigenous racism,” she continued. “I think this is a time to recognize that all of us must stand with the most vulnerable populations.”

“Hillary Clinton relied on feminism during her campaign, but it was the wrong kind of feminism.” It was, said Dr. Davis, “obsolete, bourgeois white feminism.”

Candidate Clinton’s repeated use of the term “glass ceiling” betrayed a bias toward a group of women that was “already at the very top.” These times call for a different kind of feminism, she said, one that embraces women left out of that formulation.

“The feminist work that needs to be done is also work that men need to do,” she added.

Dr. Davis reflected on the historical moment covered in the film, her transition in the early 1970s from radical academic to high-profile defendant in a California murder trial to a leader in the black liberation struggle. She covered the major themes of her life’s work — racism and social justice, feminism and gender justice, mass incarceration and the prison-industrial complex.

Dr. Davis spoke not just about the past and present, but also the future. She had general suggestions for people working for social change and justice, but resisted offering a checklist of recommended actions and organizations — something she might have done 40 years ago, she said.

“I feel somewhat awkward being placed in the position of telling young people what to do today,” Dr. Davis responded to Dr. Cottom, who asked how today’s young “organizers and radical thinkers” should begin their work.

“I remember when I was the age of the young people you’re referring to. We didn’t ask the elders what we should do,” Dr. Davis said. She and her peers needed to find their own way.

Today, elders — Dr. Davis included herself in that category — should encourage young people “to find their own passion, to do the work, to experiment, to be imaginative, to be innovative, even though they may make mistakes.”

“Where do we go from here?” Dr. Cottom asked Dr. Davis toward the end of the event.

“You know, that’s not a simple question,” Dr. Davis replied. “I would suggest that you find something that you’re passionately involved with and figure out how to sustain it” over “decades and decades.”