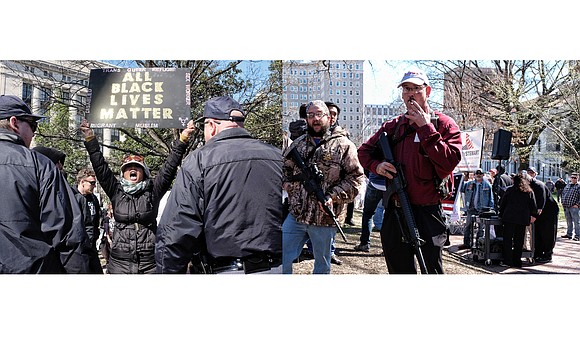 At left, a protester who identified herself as Gabriela Salong leads a chant during last Saturday’s rally at the Bell Tower in Capitol Square organized by ICE Out of RVA, a coalition of Latinos, African-Americans, Muslims, LGBTQ and other individuals, to show solidarity for refugees and immigrants. The coalition held the demonstration to counter a rally scheduled by Corey Stewart, a GOP candidate for governor, who calls for an end to “sanctuary cities” that he says blatantly violate federal laws by not turning over undocumented immigrants to authorities.

While Virginia law allows for the open carry of firearms, Capitol Police formed a human barricade between the two groups.

Reports indicated that the immigration rights coalition did not have a permit for their rally, but were not ejected from Capitol Square.

Col. Anthony S. Pike, chief of the Capitol Police, had not responded to a Free Press request for information and comment by Wednesday’s press time.