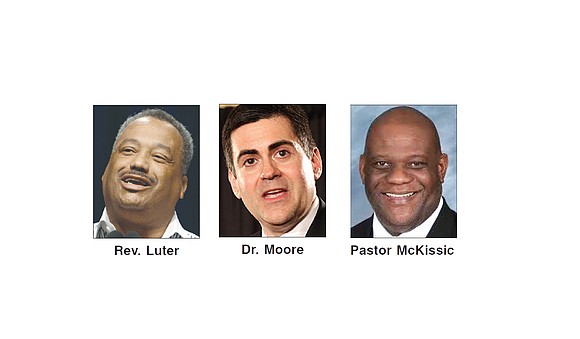 From the head of the SBC’s black fellowship to former Southern Baptist Convention President Fred Luter, these officials have made it clear that, as one of their statements said, “We are pulling for Dr. Moore.”

On Monday, Dr. Moore met with Frank Page, president of the SBC’s Executive Committee, as news swirled that Dr. Moore’s job as president of the denomination’s Ethics and Religious Liberty Commission might be on the line. Dr. Moore was a sharp critic of presidential candidate Donald Trump at a time when the overwhelming number of white evangelicals supported him.

But after the meeting, the two noted in a joint statement that “racial reconciliation” was among the topics they discussed as they “developed mutual understanding on ways we believe will move us forward as a network of churches.”

About 81 percent of white evangelicals voted for President Trump. But the nation’s largest evangelical denomination also is striving to improve its race relations — especially given its Civil War-era history of defending slavery — and Dr. Moore has been one of the SBC’s most vocal champions of that effort.

Alan Cross, a Southern Baptist minister who authored a book on racism and Southern evangelicals, said the declarations by African-American Southern Baptists “were very strong and I do believe were key in moving this in a healthy direction.”

“Seeing the SBC led by African-American pastors in calling for reconciliation in this divide is significant,” he said.

Two of three recent statements featuring African-American leaders’ support of Dr. Moore compare him to the Dr. Martin Luther King Jr., a leader whose messages about justice were rejected by some of his generation, including some Southern Baptists.

In an open letter published last week in Baptist outlets, Byron J. Day, president of the National African-American Fellowship of the SBC, called for unity within the denomination.

“There are some who have suggested withholding cooperative dollars until Dr. Moore is either disciplined or fired. However, Russell Moore has done nothing worthy of discipline or firing,” he wrote. “He has represented all Southern Baptists, contending for the highly visible ethical issues of abortion and biblical marriage; but he has also addressed social injustices such as racism which have been long overlooked.”

Roger S. Oldham, spokesman for the SBC Executive Committee, confirmed that some churches have threatened to siphon donations away from the SBC, but said those considerations do not relate to Dr. Moore alone. A study committee will investigate the reasons for those requests and determine how to resolve them.

“Over the past several months, we have received numerous phone calls from pastors and other individuals saying their churches were considering withholding or escrowing funds from the convention over a number of issues,” he said.

Other statements of support were issued after Dr. Moore wrote a column apologizing to Southern Baptists who thought he was critical of anyone who voted for President Trump and after national and state Baptist organizations decided to consider investigations related to his agency.

Rev. Luter’s was the first name on a letter posted on the New Orleans Baptist Association website responding to a request received by the Louisiana Baptist Convention to study recent actions by the ERLC.

“Dr. Moore speaks with a prophetic voice to this generation,” said Rev. Luter and other signatories, including African-American, white and Hispanic Baptists. “We may not like everything that he says, but we fear what our faith community may become if we lose his voice.”

Dr. Moore has said that he is confident he will remain in his post. Ken Barbic, who chairs the ERLC board, has described Dr. Moore as “a Gospel-centered and faithful voice for Southern Baptists.”

A third endorsement came from Pastor William Dwight McKissic Sr. of Arlington, Texas, who suggested that predominantly minority churches may want to determine their future contributions to the Southern Baptist Convention based on the final decision on Dr. Moore’s status in the denomination.

“The implications of the executive committee’s investigative report is staggering and could be tantamount to an earthquake in the convention,” Pastor McKissic predicted. “If Dr. Moore is marginalized or fired, 80 to 90 percent of Southern Baptist Black Churches who share Dr. Moore’s views on President Trump would also simultaneously feel as if their political convictions regarding the current president of the United States would also be officially reprimanded, rejected and rebuked by the Southern Baptist Convention.”

Pastor McKissic proposed the original language for the resolution adopted at last year’s SBC annual meeting that called for repudiating the Confederate flag, a step Dr. Moore called for the previous year, saying, “Let’s take down that flag.”

When that statement was adopted, Dr. Moore said Southern Baptists “made history in the right way.”

“This denomination was founded by people who wrongly defended the sin of human slavery,” Dr. Moore said at the time. “Today, the nation’s largest Protestant denomination voted to repudiate the Confederate battle flag, and it’s time and well past time.”