CARE van service eyed by City Council due to complaints 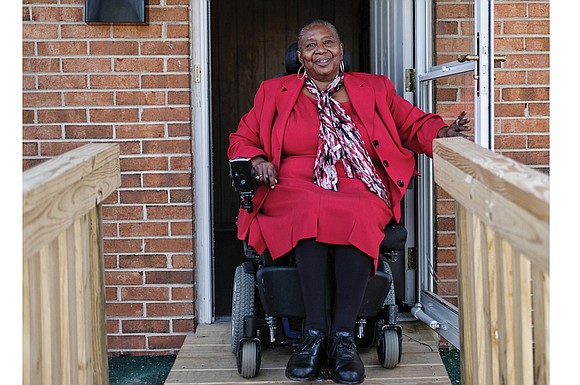 Cora J. Dickerson says that GRTC’s CARE van service is an affordable option for her to get from her home in Richmond’s Randolph neighborhood to her medical appointments and volunteer meetings, but the unreliable service is frustrating. Photo by Sandra Sellars

GRTC is acknowledging that its CARE van operation is providing “unacceptable” service to the hundreds of elderly and disabled people who rely on the specialty door-to-door transportation to get to dialysis or to work, see doctors, go shopping or handle other business.

The transit company issued the acknowledgement and disclosed the steps it is taking with its contract operator, MV Transportation, to make improvements after Richmond City Council members got another earful about shoddy service from a frequent rider and advocate, Cora J. Dickerson, during Monday night’s council meeting.

“The concerns expressed by CARE customers are serious and unacceptable,” GRTC spokeswoman Carrie Rose Pace stated in responding to a Free Press query in the wake of Ms. Dickerson’s comments to the council condemning the CARE van service.

Ms. Dickerson, 68, uses a wheelchair because of polio that afflicted her as a child. She told council members that she and others have missed doctors’ appointments, been picked up hours late or had to find other transportation when the van did not come.

“I have had firsthand experience,” Ms. Dickerson said. “In December, I was scheduled for surgery. I made a reservation to be picked up by 5:30 a.m. to get to the hospital by 7:30. But the van never came,” said Ms. Dickerson, who retired as director of the United Way of Greater Richmond & Petersburg’s Infant & Toddler Connection and its 211 information call center.

She said she was able to get help from Senior Connections to find an alternate means of transportation, otherwise she would have had to cancel her surgery.

At times, vans have picked up passengers up to four hours late, she said.

While CARE van service has never been excellent, Ms. Dickerson said, it has suffered since MV Transportation took over in November 2014, and has declined even more sharply in the past 12 months.

Ms. Pace said concerns like those expressed by Ms. Dickerson have resulted in “GRTC working closely with MV Transportation on service level improvements to meet what we expect for our riders.” She said that “addressing CARE needs a high priority right now.”

One problem has been high turnover among the drivers, who are paid substantially less than GRTC bus drivers.

Improvement plans include efforts to quickly hire and train new drivers to fill vacancies, Ms. Pace stated, noting that some new drivers have begun working in the past month. Hiring moves more slowly because applicants need near perfect driving records to be considered.

MV Transportation also is considering subcontracting some of the workload to other companies “to assist with demand,” Ms. Pace stated, although that has not yet happened.

And GRTC is still trying to get a program off the ground that would use taxis or online ride-sharing companies like Uber and Lyft as options for CARE customers, she added.

Meanwhile, GRTC also has struggled to field enough vans because of breakdowns in the aging fleet, which leaves fewer vehicles available to make scheduled pickups.

“Thirteen new vans have been delivered to GRTC,” Ms. Pace said, and should be in service soon, though she did not specify a date.

She said that staff met with GRTC’s board and held a meeting with riders to discuss the changes. GRTC plans to brief City Council’s Land Use, Housing and Transportation Committee headed by 6th District Councilwoman Ellen F. Robertson at 3 p.m. Tuesday, March 21.

“We’ve heard this before,” Ms. Dickerson said of GRTC’s response, “but the promised improvements never seem to happen. We’ve heard so much that they are hiring new drivers, and those drivers are as nice as they can be. But they still are picking up people late. The reality is that GRTC and MV keep talking about improvements, but the situation has not gotten better.”

Ms. Dickerson maintains a busy schedule of volunteer activities at her church and in the community. She also is an appointee to the city Committee on the Elderly and Disabled. She said she would drive herself to her meetings and appointments if she could, “but I’ve had to give up driving because of health reasons.”

The CARE van is an affordable option, but the unreliable service is frustrating, she said.

“I have to schedule a van for three to four hours earlier to try to ensure that I can get to meetings,” she said.

Councilwoman Reva M. Trammell, 8th District, called it a matter of “life and death” for the service to be improved.

The problems must be addressed, Councilman Parker C. Agelasto, 5th District said. He said that the council needs to consider launching an in-depth investigation to determine what is going wrong and to usher in change.

Mr. Agelasto said that the service problems cannot be allowed to continue.