Dying with debt: Advice from experts 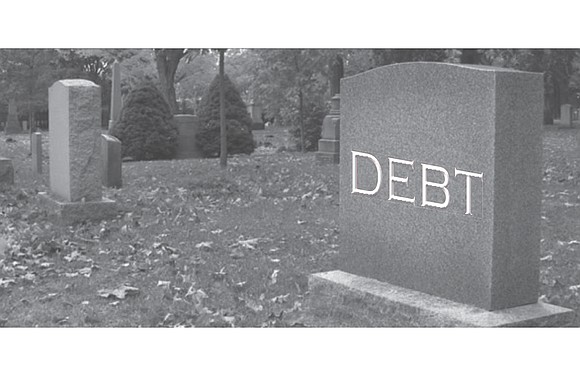 You’re probably going to die with some debt. A majority of people do.

In fact, 73 percent of Americans had outstanding debt when they died, according to December 2016 data reported by Credit.com.

Those consumers carried an average total balance of $61,554, including mortgage debt. Without home loans, the average balance was $12,875.

Among the consumers who had debt when they died, about 68 percent had credit card balances.

The next most common kind of debt was mortgage debt, 37 percent; followed by auto loans, 26 percent; personal loans, 12 percent; and student loans, 6 percent.

The good news is that most debt is not passed on to your spouse and children when you die as it is in Virginia, which is not a community property state.

In general, debt belongs to the deceased person or that person’s estate, said Darra L. Rayndon, an estate planning attorney.

However, if your spouse or someone else co-signed, or was a co-applicant on a credit card or a loan, they will become responsible for any debt when you die.

And they may not inherit anything because your estate becomes liable for your debt, and creditors can seek to take any funds you leave behind to pay off what you owed.

If you have enough assets to cover the debts, the creditors get paid and beneficiaries receive whatever remains, Ms. Rayndon said.

If you don’t, she said, the creditors get paid some and the family gets nothing.

Not all debt continues after death. For example, student loan debt is eligible for cancellation upon a borrower’s death if the government was the lender.

Things can get very messy for survivors when a house or other real estate is involved.

If a home is your only asset and it is where your spouse or children also live, creditors can seek the sale of that asset to cover your outstanding debt. That means your surviving spouse or other relatives might have to sell the house to pay debts, including any outstanding mortgage balance or take on your debts in order to save the house.

To save them hardship, life insurance can help cover debts, said Ms. Rayndon.

As part of making plans for the inevitable, James M. Matthews, a certified financial planner, recommends writing a will.

“If you don’t write a will, your state of residence will write one for you should you pass away,” said Mr. Matthews. “Odds are the state laws and your wishes will differ.”

Along with a will, he urges people who have assets to consider setting up a trust to provide ongoing management and assurance that children or others will end up with them.

Even before you die, he counsels that there is a need for other documents.

That includes two powers of attorney just in case you become disabled or mentally incapacitated before you die.

He also urges people to make a living will so physicians will follow your wishes on end-of-life decisions in case you are unable to communicate because of illness or an accident.

Also, he believes you need to leave a written release under the Health Insurance Portability and Accountability Act so loved ones or trusted parties can gain release of your medical records.