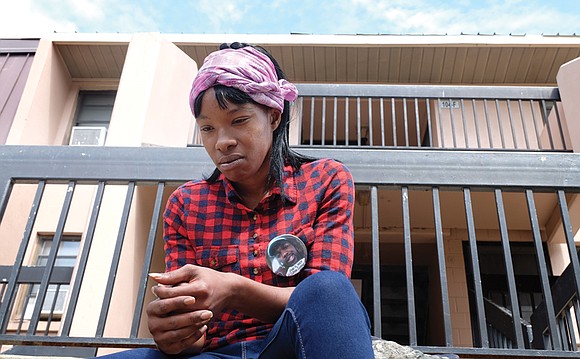 Takeila Knight holds her own vigil Tuesday outside the Gilpin Court apartment of her stepbrother, Marvin Christopher “Pee Wee” Eley, who was killed early Sunday. Her button is in memory of one of six other relatives who she said were killed in recent years Photo by Sandra Sellars

Every day since Sunday, Takeila Knight has held her own personal vigil outside the Gilpin Court apartment of her stepbrother, Marvin Christopher “Pee Wee” Eley, 26, one of the four people killed early Sunday morning in a horrific spate of violence in the public housing community.

Haunted by her stepbrother’s death, Ms. Knight hung a silver star-shaped balloon with “I love you” inscribed in black magic marker and four long-stemmed red roses on a tree in front of his home.

“I can’t believe he’s gone,” Ms. Knight said. “He was the kind of guy who would give you the shirt off his back. He had his problems, but took care of his family.”

Over the course of eight days, nine people were fatally shot in Richmond, prompting grieving families and city officials alike to decry all the killing and ask what will it take to make it end.

Mr. Eley’s body was discovered at 5:40 a.m. Sunday on the ground outside of his apartment in the 100 block of Federal Street. Police said he had been shot about two blocks away in the 1200 block of St. James Street.

About an hour earlier Sunday and two blocks from where Mr. Eley was found, police were called to the 1200 block of St. Paul Street for a report of gunfire. They discovered the bodies of Aaron Robinson, 50, Jenelle Smith, 26, and Cynthia K. Williams, 26, inside an apartment.

Police have not said whether there was a connection between the two incidents. But Chief Alfred Durham noted, “There is almost always a backstory to these shootings.”

In a plea he has sounded before, Chief Durham and other city leaders called on residents to come forward with information.

Roses and a balloon form a memorial Ms. Knight put up in memory of Mr. Eley.

But Ms. Knight and others in Gilpin Court said they are hesitant to talk with police about what they’ve seen or heard.

“I don’t got outside after dark because it’s dangerous,” said Annie Mahdee, president of the Gilpin Court Tenants Council. “I’m 75 years old and afraid to talk to the police.”

She said she fears retaliation.

Police also are looking for witnesses with information about a Highland Park shooting about 10:20 p.m. last Saturday in which a 9-year-old girl was struck by a bullet as she stood with other children on a porch on 5th Avenue. Nearby on Pollock Street, police found Victor A. Harris, 57, who had been shot in the head while riding a bike. He died Monday night at a local hospital.

The rise in violence has shaken the city and spurred a shift of attention, focus and possible resources on the city’s public housing communities, where much of the violence has occurred and where more than 2,000 people call home.

“My heart sinks every time I receive a phone call from Chief Durham early in the wee hours of the morning because I know what it means,” Mayor Stoney said. “Our prayers go out to the families of the victims. I want us to not only come together to mourn their loss, but to strengthen our resolve as a community to do everything we can to stop the violence.”

He charged Chief Durham and Mr. Somanath to use any and all “legal means necessary” to stem the tide of violence.

“We have made13 arrests after the Sunday event,” Chief Durham said. “We have weekly strategy meetings to address these homicide issues and assigned two walking patrolmen to Gilpin” as was done in Mosby Court in the East End after a State Police special agent was shot and killed in May.

“We are doing the best we can,” Chief Durham said

Mr. Somanath said new lighting and cameras will be added to public housing communities and stricter lease enforcement efforts will be undertaken, with RRHA ready to evict residents found involved with guns, drugs or gang activity.

He said residents will be required on Oct. 1 to have decals on their cars so that RRHA staff “can easily identify vehicles that are not associated with a lease owner.”

Mr. Herring said as the city’s chief prosecutor, he needs the cooperation and assistance of witnesses and others in helping to bring justice. But he also asked for patience from city residents as officials develop a long-term strategy to curb the violence.

“Sadly, what is a little different for Richmond and some of the other cities is that guns are so prevalent they are like accessories in the way the Chief or Mr. Somanath and I put on a tie,” Mr. Herring lamented. “There is a new generation of people who, for whatever reason and probably fueled by social media, carry themselves that way.”

The city administration has talked for decades about the problems arising from a concentration of poverty in low-income neighborhoods. The administration is coordinating a housing summit on Oct. 31 with representatives from RRHA, the Better Housing Coalition, the Richmond Association of Realtors and other organizations to design a plan for affordable housing in the city. Included will be options for dedicated funding sources for the redevelopment of public housing.

One in four Richmonders lives in poverty, including many living in the city’s public housing communities. RRHA officials said this week they have worked to offer economic and education solutions to public housing residents to escape the social ills connected with poverty.

Resident services coordinators in each of the public housing communities provide job assistance, education and health care management services for residents, including those in Gilpin Court.

“We have a resource center where residents, young and older, can come into the Calhoun Center to take care of health-related issues,” said an RRHA official at Gilpin Court who did not want to provide her name for fear of losing the trust of residents. “We work with the Workforce Development Center, where we help people set up appointments and transport them in the van to find jobs.”

RRHA, she said, helps pay for GED classes and job searches, offers a job club and often has employers come to the center to recruit employees.

She talked about the success of the Family Self-Sufficiency program. Under it, residents establish a five-year plan and find a job. Once employed, their rent, which is income based, rises. Under the program, the difference paid by residents because of the higher income is put into an escrow account. At the end of the five years, she said, the residents get the money in the account if they have reached the goals they outlined and all adults in the home are working. They can spend the money on a down payment for a home, to send a child to college, a car or whatever the resident wants.

The goal, she said, is to help move families from poverty to self-sufficiency.

She also talked about RRHA’s Tomorrow’s Promise Fund, which has awarded more than $200,000 in college scholarships to about 75 high school graduates living in public housing.

She talked about programs at Gilpin Court for young people, including a sports partnership with Virginia Commonwealth University, a fine arts academy, pre-employment assistance and life skills workshops.

“It’s important for our young people to take field trips, too, so they can see what’s outside of their community,” the RRHA official said. “That’s the beauty of these programs — to help residents escape poverty and become successful.”