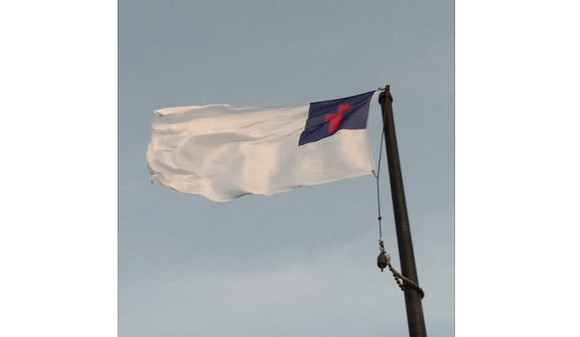 A Confederate flag flying in Riverview Cemetery in Richmond’s West End has been replaced with a new banner — the Christian flag, a white banner with a red cross centered in a small, blue square in the flag’s top left corner.

The change was made after the Richmond Free Press, in its April 5-7 edition, featured a photo of a Confederate flag flying in the city-owned cemetery under the headline, “Why is it flying?”

The initial flag spotted at Riverview Cemetery is a replica of the original national flag of the Confederacy and its first battle flag. It also is the official banner of the United Daughters of the Confederacy, which owns the section in the city cemetery on which the flagpole stands and where some members are buried.

While the replacement happened, how and why it happened remains a bit of a mystery.

According to the UDC’s national headquarters in Richmond, all decisions about the flag would be handled by a chapter of the organization. It is not clear which chapter is involved with Riverview Cemetery. No markings appear at the site, and the national organization does not make such information available, citing privacy issues.

That is not the case at city-owned Maury Cemetery in South Side, which continues to have a Confederate flag flying on a UDC-owned plot. At that location, the Elliott Grays Chapter of the UDC is named as the responsible chapter.

James Laidler, manager of Richmond’s cemeteries, said he has no idea why the UDC site at Riverview now sports a different flag.

He and his staff raise and lower the American flags in the city’s cemeteries, but he said he and other city employees are not involved with any flags on the UDC sites.

The Christian flag has been around for more than a century. It is the creation of Charles Overton, a New York church Sunday School superintendent, according to Wikipedia, the online encyclopedia. He came up with the idea in 1897 and then worked with Ralph Diffendorfer of a Methodist youth missionary group to create the flag in 1907.

Mr. Overton and others promoted the flag’s use, and it gained official status in 1942 when the Federal Council of Churches, a predecessor of the National Council of Churches, adopted it as the organization’s flag. The National Council does not mention or show the Christian flag on its website. However, the flag remains in wide use, particularly among Protestant denominations that are affiliated with the council, Wikipedia states.