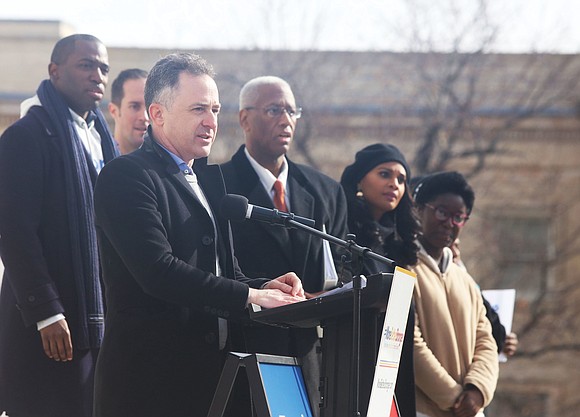 The signs spoke to the diversity of those assembled, from Virginia Educators United, the Justice and Reformation for Marcus-David Peters Movement, the Richmond Branch NAACP and other groups.

As part of its legislative package, the Richmond City Council unanimously approved in October a resolution requesting increased funding for public education from the state during the 2019 General Assembly session.

“Virginia is a great state, and we can and we will do better,” Richmond City Council President Chris Hilbert, 3rd District, told the crowd. “But you know when that will happen? When we demand better,” he said. “We’re not going to cut our way to educational excellence.”

Mr. Kamras and Rodney Robinson of Richmond noted that the lack of increased state support for public education stands in sharp contrast to the millions in state funding being spent on the construction of a new General Assembly Building underway at 9th and Broad Street and to attract Amazon’s second headquarters to Northern Virginia.

Both projects have been celebrated by state figures and politicians, including Gov. Ralph S. Northam and former Gov. Terry McAuliffe.

The irony wasn’t lost on those attending the rally, as Mr. Robinson lambasted the state’s priorities in focusing their economic resources on “the world’s richest man, (Amazon founder, chairman and CEO) Jeff Bezos” while neglecting the state’s crumbling education infrastructure.

“No student should be forced to learn in these conditions,” said Mr. Robinson, who was recently named Virginia’s Teacher of the Year for his work with teens at the Virgie Binford Education Center in the Richmond Juvenile Detention Center.

He said the failure of state legislators to approve more education funding would be remembered on Election Day 2019, when all 140 seats in the Virginia General Assembly will be up for election.

“We will boot you out of office because our kids deserve better!” he said to cheers.

Although Mayor Stoney and Mr. Kamras have been warned by area lawmakers that a significiant increase in funding was unlikely, Richmond Delegates Delores McQuinn and Jeff Bourne and Delegate Schuyler VanValkenburg of Henrico County, D-Henrico attended Saturday to show their support for Richmond’s goals.

Another rally led by teachers is planned for Jan. 28.