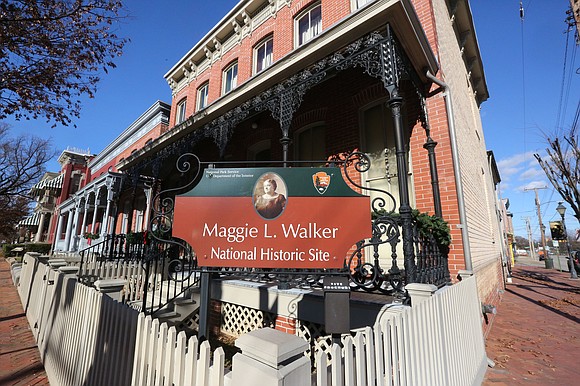 A sign was posted at the Maggie L. Walker National Historic Site in Jackson Ward informing visitors that the site is closed with the partial shutdown of federal government operations. The National Park Service, which is part of the U.S. Department of the Interior, is impacted by the shutdown brought on by President Trump’s insistence for $5 billion to build a border wall between the United States and Mexico. Congress has refused, offering $1.5 billion instead for border security. Roughly 800,000 federal employees are impacted by the shutdown, which was in its fifth day on Wednesday. Of those, 420,000 employees considered “essential,” including air traffic controllers, FBI agents and others, must continue to work without pay. Photo by Regina H. Boone Richmond Free Press

The root of the muted celebration was congressional passage of long-delayed federal prison sentencing reform legislation that President Trump signed into law last Friday, just hours before the government shutdown and the congressional recess began.

Passage of the prison reform bill came after Congress did not give President Trump the gift he vociferously demanded of $5 billion in taxpayers money to build a wall along part of the nation’s southern border between the United States and Mexico.

Amid doubts about when roughly 800,000 federal workers would get paid and considerable uncertainty about who is charting the nation’s foreign policy, President Trump momentarily dropped his big picture rhetoric and attention in order to focus on giving his support to the bipartisan effort for reforming the highly controversial and increasingly unpopular federal minimum mandatory federal prison sentencing law.

It also reduces the life sentence for some drug offenders with three convictions, or “three strikes,” to 25 years.

Another provision would allow about 2,600 federal prisoners sentenced for crack cocaine offenses before August 2010 the opportunity to petition for a reduced penalty.

That will be a win for minorities who were caught up in a sentencing system that made crack cocaine a more serious offense than other types of cocaine, said U.S. Sen. Cory Booker of New Jersey, a potential Democratic presidential candidate in 2020.

“When you correct an injustice in a biased system, it dramatically helps the marginalized people,” Sen. Booker said. “With that provision alone, 96 percent of the people who are helped by that are black or Latino.”

“The First Step Act is not the end,” said Hilary O. Shelton, the national NAACP’s chief Washington lobbyist. “It is just the necessary first step in a series of efforts to improve and reform the federal criminal justice system.”

His comments echoed those of a broad spectrum of federal prison sentence reform advocates addressing the needs of the more than 1 million people behind bars in the federal prison system, many of them serving time for drug offenses.

Virginia’s 3rd District Congressman Robert C. “Bobby” Scott, who began championing sentencing reform more than two decades ago as a member of the Virginia General Assembly, guardedly lauded the unexpected Trump move on sentencing reform. He noted there are many unresolved details to be addressed.

“It is clear that this bill will help some,” Rep. Scott said in a statement, cautioning as to the law’s full impact. It “is clear that the bill may actually make our system less just and fair for all,” he said. “I decided to vote for this legislation, but I hope that in the New Year, and with a new Congress, we can revise some of these problematic provisions,” he said.

Among the advocates of the legislation was a diverse and unlikely group that included presidential adviser Jared Kushner, Kim Kardashian West, the National Urban League, black ministers and minority lawmakers and libertarian-leaning conservatives.

Some of the bill’s advocates said it was a tough decision to work with a White House that is deeply unpopular with black people. More than 8 in 10 African-Americans said they thought President Trump was racist in a February poll by The Associated Press-NORC Center for Public Affairs Research.

Because the bill only affects the federal system, anyone given harsh sentences at the state and local levels will have no recourse. Those inmates make up the bulk of people behind bars across America.

Some groups say the bill will open the door to increased surveillance of minority communities through electronic monitoring of released inmates. Others point out limitations in the bill on which federal prisoners will benefit from its changes.

The Movement for Black Lives, a coalition of more than 150 black-led organizations, called the legislation “custom-made for rich white men.”

“All of the carve-outs make the vast majority of our people ineligible for the benefits of the bill,” the group said.

A wire report from The Associated Press contributed to this article.