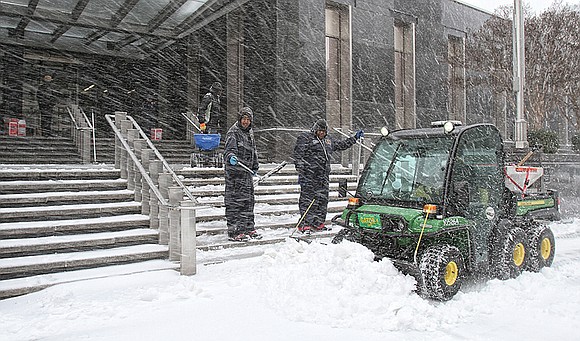 When snow falls in Richmond, City Hall is forced to pay big bucks to private contractors to clear the streets.

The reason: Up to half of the aging fleet of city dump trucks that double as snowplows are usually parked, awaiting repairs, according to a new report from the Department of Public Works.

The result: Taxpayers are saddled with a far bigger bill because of the city’s failure to replace old trucks on a timely schedule, the report noted.

In the three snowfalls this winter — Dec. 8, Jan. 3 and Jan. 16 — the city spent about $2 million, including salting and sanding. That’s about $1 million more than was set aside for snow operations.

City Hall will have to shift money in the current budget, with City Council approval, to cover the $1 million extra cost. That amount could grow if there is another snowfall in the coming weeks.

Excluding the cost of salt and sand, the main reason snow removal cost so much is the expense for outside contractors, who received nearly $1.2 million, or about 59 percent of the $2 million total, to provide 10 pieces of snow equipment.

The total payment to outside contractors was triple the $391,000 that the city spent to pay its own workers and operate its own trucks to clear 41 main snow routes and 19 secondary routes, according to the Jan. 25 report to City Council’s Governmental Operations Committee.

The report shows that the city paid its own employees $148,000 in regular and overtime pay for the four days they spent plowing snow or salting and sanding streets, and another $68,000 in fuel and other costs to deploy about 25 working city trucks. Total: $216,000.

The additional cost to deploy private contractors for the Jan. 3 snow removal: $674,415, the report states.

The city actually has enough trucks to do the job, according to the report. It owns 40 dump trucks that can be equipped with snowplows, or about one for each of the main snow routes like Broad Street that are first to be cleared.

The problem is the average age of the workhorse trucks is 9 years, and “15 to 19 (of the trucks) are consistently in the shop,” the report stated.

Mr. Rogers said the department needs 17 more replacement trucks at a cost of $2.2 million to complete its fleet and be capable of doing the job without private contractors.

The situation with the dump trucks that handle snow duties is typical of a city fleet that routinely is shortchanged.