Taxpayers on hook for $11.25M for NFL training camp 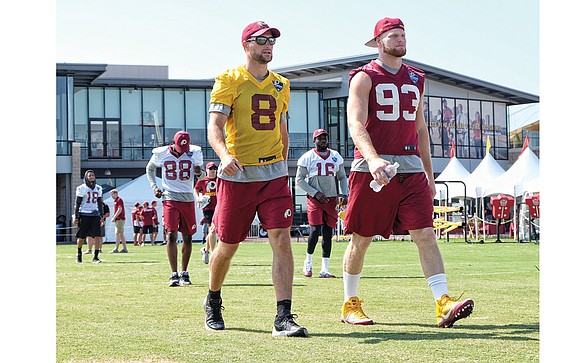 Richmond taxpayers are being handed an $11.25 million bill for the Washington pro football team’s summer training camp on Leigh Street.

That’s what it will cost to pay off the remaining $8.5 million debt on the 6-year-old building over 15 years, according to Selena Cuffee-Glenn, the city’s chief administrative officer.

The problem: The training camp, including the building that is partially occupied by Bon Secours medical offices, is failing to generate enough revenue to pay for operations and to pay off the $8.85 million the city advanced in 2012 to develop it.

The city borrowed the money on a five-year loan and now needs to refinance that debt to avoid default. The plan is to float a 15-year bond that will cost the city $750,000 a year.

City Councilman Parker C. Agelasto, 5th District, is among the many people distressed that taxpayers are being saddled with the debt, which flies in the face of promises made six years ago that the building and training camp would generate enough revenue to cover its expenses.

The land on which the building and training field sit is still owned by the state.

Mr. Agelasto believes there are two reasons the building is a flop for taxpayers.

First, he said the city’s Economic Development Authority, which owns the building, spent $2 million extra, partly to develop a park in an area where trees were removed and partly to finish the building’s second floor that remains largely vacant.

He also points to the agreement that the EDA signed with the team without any consultation with Richmond City Council.

The agreement that then-Mayor Dwight C. Jones helped craft requires the EDA, and the city, to pay the team $500,000 a year in services or cash. The team demanded that support to come to Richmond. The agreement also gives the team veto power over sponsorships and tenants, Mr. Agelasto said.

“This was a bad deal for the city,” he said.

The council is expected to approve the refinancing plan when it comes before the governing body on Monday, Feb. 26.

At the same time, a July 1 deadline is looming for the EDA, the city and the team to write a new agreement if the team continues to maintain its summer training camp in Richmond past 2020.

City Council again will not be consulted, but Mr. Agelasto wants to try to have council exert its influence.

He said he plans to introduce a resolution next Monday calling on Mayor Levar M. Stoney and the EDA to negotiate better terms, including elimination of the annual $500,000 payment and the team’s veto over sponsorships, or let the team walk away after the current agreement expires.

Mayor Stoney also has expressed concern about the previous agreement and promised to renegotiate the terms, although he has offered no specifics.

Mr. Agelasto said he hopes his council colleagues will support the resolution to show the team that Richmond could do without the camp if they are unwilling to provide better terms.

He also is urging the city administration to sell the building and apply the proceeds to pay down the remaining $8.5 million debt.