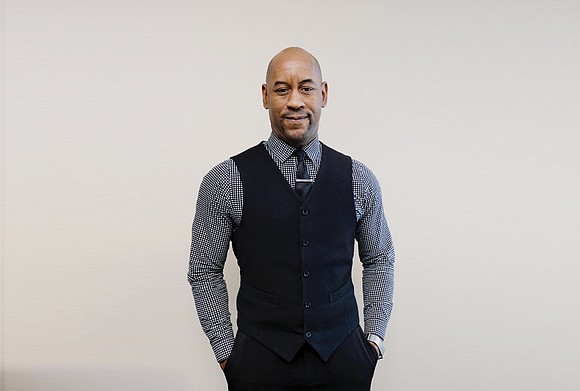 Four days after Christmas, Floyd E. Miller II was in the Metropolitan Business League’s offices at 707 W. Main St. preparing for “a new year and new opportunities for new sources of funding” for the league through grants, foundations and fundraising events.

Mr. Miller, who became executive director of the 50-year-old MBL last August, also wants to ensure that millennials join and stay active with the organization. He believes that the MBL’s junior board, whose members range in age from 24 to 32, will help lure younger members.

Founded in 1968 by a handful of influential, middle-aged Richmond business owners, the MBL was created to increase opportunities and profits for African-American businesses.

Today the league, which has grown to more than 400 members, remains largely focused on supporting small, minority and women-owned businesses.

In announcing Mr. Miller’s appointment, Sharon Dabney-Wooldridge, chief executive officer of the janitorial service KleaneKare Team Inc. and an MBL board member, said the league is “well positioned for Floyd to take us into the next decade of growth.”

Mr. Miller is the former senior director of urban programs for the Special Olympics Virginia. At the MBL, he succeeds the late Oliver Singleton, who led the league from 2003 until his death nearly two years ago.

An obituary published in the Richmond Free Press at the time described Mr. Singleton as “a genial man with a charitable heart and warm smile (who) connected many small businesses with larger ones to foster business development and expansion.”

Mr. Miller acknowledges that following Mr. Singleton is no small feat, yet he says he is primed for the task. Mr. Miller, who grew up in New Kent County, said he, with the board’s assistance, intends to build on Mr. Singleton’s work, especially in developing corporate relationships.

With a current $375,000 operating budget and goals to boost membership by 30 percent and bring in $100,000 within his first few months, the MBL is “halfway there,” Mr. Miller said.

He attributes the organization’s growth to an “unbelievable” board that he says “is active and engaged in the process of being successful.” Programs such as Women Who Mean Business will continue and corporate partnerships with Dominion Energy, Bon Secours and Capital One remain solid, he said.

Carla P. Childs is the daughter of the late Garfield F. Childs Sr., one of the MBL’s founders. She was born in 1968, the same year that the MBL was created.

Ms. Childs recalled how her father’s life was consumed by the organization and other projects he believed would increase opportunities and profits for African-American business owners. Their gains, he maintained, could then be reinvested into black communities, she said.

Other MBL founding members include Neverett A. Eggleston Jr., M.A. Motley Sr. and the late Stafford Alvin Flowers. A yellowed newspaper clipping from 1968 includes Mr. Childs announcing the MBL’s formation to “implement the economic development of small businesses through larger developments and combinations of efforts to improve our total economy.”

The same article touts a $1 million loan from Richmond’s Consolidated Bank and Trust Co. and the U.S. Small Business Administration to help the MBL boost the “sagging economic life of the inner city.”

Gary L. Flowers, a Richmond radio talk show host and former field director for the national Rainbow PUSH Organization, said his father, in helping to start the MBL, recognized the chasm between black and white businesses. He believed “an opportunity gap” was in place, Mr. Flowers said.

Neverett A. Eggleston Jr., center, who helped found the Metropolitan Business League in 1968, stands with Carla P. Childs and Gary L. Flowers on the site of the organization’s original home on 2nd Street near Jackson Street in Jackson Ward.

Thus, when the MBL was created, he said, black business owners were eager to join the organization, which was linked to the National Business League founded in 1900 by Booker T. Washington.

In addition to the programs, training and networking that MBL provided, its members wanted a sense of unity, said Mr. Eggleston, who served on the NBL’s national board along with Stafford Flowers.

Mr. Eggleston, like many of the organization’s members, would go on to create several businesses.

Ms. Childs, who works for the city’s Department of Social Services, said her father loved the fact that Richmond’s Jackson Ward community, known as the “Black Wall Street” of America during the early 1900s, was still home to so many black businesses when the MBL started.

Gladys Jackson Fleming was 17 and about to graduate from Richmond’s Armstrong High School when the MBL was founded. In 1984, her interior design and business background landed her at MBL as its executive director.

“My financial adviser (and later spouse) Jessie Fleming told me that it was time for me to give back to the community,” Mrs. Fleming recalled.

Her MBL leadership came five years before the City of Richmond v. J.A. Croson Co. case in which the U.S. Supreme Court ruled in 1989 that the City of Richmond’s minority set-aside program, which gave preference to minority business enterprises in awarding municipal contracts, was unconstitutional. The high court found that the city failed to identify the need for remedial action to help minority-owned businesses and failed to show that other remedies to combat discrimination were insufficient, thus creating the need for a set-aside program.

Although the ruling had somewhat of a chilling effect for black-owned businesses, Mrs. Fleming and other MBL supporters forged ahead. The U.S. Minority Business Development Agency along with the Community Development Block Grant program helped the league establish two offices that eventually were merged into one site on Marshall Street, Mrs. Fleming said. Increased recruiting efforts led to an influx of new members. Construction no longer dominated the league’s membership base as more general service contracts came into play.

The opening of Richmond’s 6th Street Marketplace in Downtown in 1985 enabled the MBL to help several African-Americans and minorities establish businesses with the goal of revitalizing the city’s dying retail environment. Although the 6th Street Marketplace is long gone, other MBL successes included assisting iconic business owners such as Langston Davis and Dwight Snead grow their companies.

“They grew in spite of the (U.S. Supreme Court ruling in the Croson case) because they had financial backing through bonding companies,” Mrs. Fleming recalled. “Dwight Snead is now a major contractor, and he brings other minorities into the business.”

When Mrs. Fleming left the MBL in 1994, Lynda Sharp Anderson, a former executive, stepped in to lead the organization until 2003.

“MBL was ripe for opportunity, to take it from where it was to where I was able to carry it,” said Mrs. Sharp Anderson. “All the stars aligned and several corporations wanted to partner with black businesses. Minority businesses were flourishing and people were ready to do business.”

Many observers credit Mrs. Sharp Anderson’s “ability to bring people together” as being key to introducing corporations to MBL members, developing a business membership guide and creating the signature awards dinner that brings in high-profile speakers.

Ms. Childs believes her father would be pleased with the MBL’s progress.

“He would say that we, as a community, need to come back together and work together and to keep capital in our community,” Ms. Childs said. “Keep it basic and make yourself self-sufficient.”

A key to that is business ownership, Mr. Flowers said, which the MBL can help with.

“Young people should focus on entrepreneurship rather than turn their talents and intellectual properties over to others who don’t have their best interests at heart,” Mr. Flowers said. “Apps, algorithms, STEM courses should be the norm for millennials who should view the world as their oyster.”