VUU loses in first round to VSU 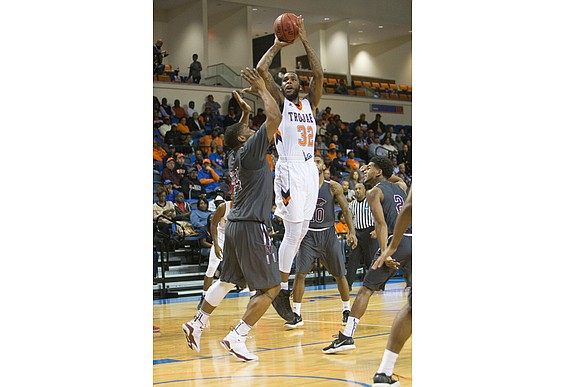 Virginia State University senior Richard Granberry goes up for a shot, helping the Trojans to their 81-76 victory over Virginia Union University last Saturday in the NCAA regionals in Ettrick. VSU would go on to lose to Shippensburg University in Sunday’s semifinal game.

For college coaches, basketball season is never ending. As soon as one campaign ends, the next begins in terms of recruiting and preparation.

“We feel good about the way we finished. Now we’ve got to keep it rolling,” he said. “And we’ll get to work, starting tomorrow.”

Despite losing six seniors from a squad that won the CIAA Tournament in surprise fashion, Coach Butler is happy about the future.

A prime reason for optimism centers around 6-foot-7 sophomore William Jenkins, who upped his game to another level in postseason play.

“Will is a great athlete. I can see him being preseason All-CIAA next season,” Coach Butler said.

Oozing with new-found confidence, Jenkins had 18 points (9 for13 from the floor) and seven rebounds in the loss at VSU. 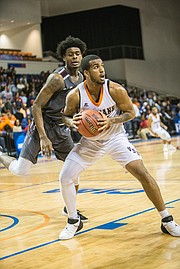 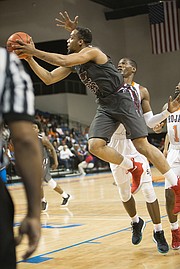 Virginia Union University senior Todd Hughes goes up for a shot against Virginia State University’s defense during the NCAA opener at the VSU Multi-Purpose Center in Ettrick.

In Charlotte at the CIAA Tournament, Jenkins had 40 points and 23 rebounds as VUU won four games in four days to win its first CIAA crown since 2006.

“I wanted seniors to go out with a ring,” Jenkins said. “So I played like I was a senior myself.

It marked the second consecutive season VUU has reached the NCAAs after a long drought.

“Our goal is to play on Saturday nights (in the CIAA final), go to the NCAAs each year and eventually win the NCAA,” Coach Butler said.

Already, there is help on campus.

Coach Butler and his assistants have their searchlights out for more talent.

Coaches agree, if you snooze you lose.

At least in the eyes of the VUU coaching staff, the 2018-19 season is well underway.