Spotlight on founder of the nonprofit Friends of Pump House 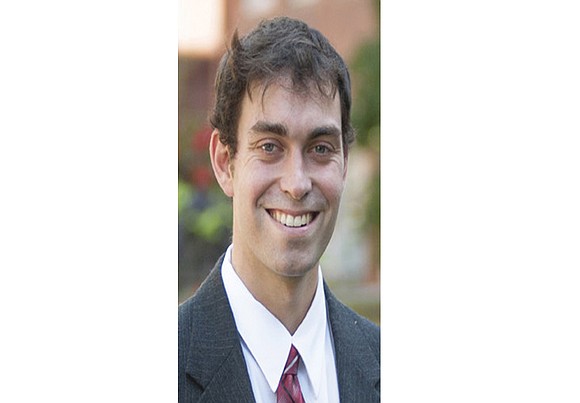 Joseph P. Costello first discovered the Pump House in Byrd Park in the summer of 2013. He was with friends when he visited the Gothic Revival structure situated just north of the James River and Kanawha Canal off Pump House Drive. It was constructed of local granite in 1883, with annex buildings added in 1905. “I was blown away by the beauty of the building,” Mr. Costello says.

The 27-year-old now is dedicated to having the public enjoy the beauty and history of the building. Last year, after conducting research and putting together a plan through his master’s program at Virginia Commonwealth University, he founded Friends of Pump House, a nonprofit working toward revitalizing the building for public use once again.

The Pump House “is standing there empty, decaying and not being used,” Mr. Costello says. “The Friends of Pump House is keeping it on life support. It is in a public park and, once restored, it could be used for private events, parties and other activities as it was used until the mid-1920s.”

Still owned by the City of Richmond, the building has a unique history as a true multipurpose public work, Mr. Costello explains. The downstairs housed equipment that pumped water from the river and the canal to the Byrd Park reservoir, the city’s main water supply at the time.

But the floor above the equipment was designed as a social venue, with an open-air dance hall or pavilion for events. Think “high-society dance parties,” Mr. Costello says. “Think Great Gatsby. The well-to-do would arrive by trolley or bateau boat,” he explains.

Designed by Wilfred Emory Cutshaw, Richmond’s city engineer from 1874 to 1907, the Pump House was placed on the site of the first canal system in the nation, part of George Washington’s vision to connect Richmond to the Kanawha River in West Virginia, Mr. Costello says.

“The canals were dug by enslaved people and the pump house was built by recently freed people and immigrant laborers,” he says. “In the 1920s with the advent of the car and new pumping technology, the building fell into disrepair and was vandalized heavily. The pumping equipment was sold to the Japanese before World War II. The city actually sold the building in the 1950s to First Presbyterian Church, but then bought it back.”

Through the efforts of Ralph White, former manager of the James River Park System, and Dr. William E. “Bill” Trout III, a writer who has mapped and charted many of Virginia’s waterways, “the building has been upright from the 1980s until now,” Mr. Costello said.

As part of his VCU master’s thesis in urban and regional planning, Mr. Costello drew up a plan for the Pump House’s revitalization after talking with Nathan Burrell, superintendent of the James River Park System, other experts and stakeholders.

He started the nonprofit last year, partnering with the Enrichmond Foundation, which handles donations and grants. Already, the group has raised $33,000 to get the project going.

“Resurrection and cleanups are not easy chores. Monthly cleanups are making a dent in removing nearly century-old debris and yards of coal dust and dirt,” he says.

The first phase is to get the building open, including repairing the roof and gutters, hooking up the water and sewer, retrofitting the building to include restrooms and making it accessible to people, including those with disabilities, he explains.

That phase, he estimates, will cost between $350,000 and $500,000, not counting in-kind donations of materials and labor and receiving grants to help with costs.

“Full restoration is probably somewhere in the $8 million to $12 million range,” he says. “It is a great piece of Virginia, as well as American, history.”

Meet a community activist with a vision and this week’s Personality, Joseph P. Costello:

Date and place of birth: June 29 in New Brunswick, N.J.

Education: Bachelor’s degree in political science and history, Christopher Newport University; master’s in urban and regional planning, Virginia Commonwealth University; and a Wilder Fellow for two years with the Department of Social Services under the L. Douglas Wilder School of Government and Public Affairs.

Family: I am the middle child; I have an older sister and a younger sister.

Why I started Friends of Pump House: As a second semester master of urban regional planning student, I broached the topic of Pump House revitalization with Nathan Burrell, superintendent of the James River Park system. He supported my plan and the JRP system was my “client” and recipient of my revitalization plan. Through my research, it was obvious there was a lack of organizational capacity to really implement a revitalization plan. I didn’t want my plan to sit on a shelf and formed a nonprofit to work with the city and community and many involved experts to help coordinate and focus restoration efforts.

Why I am excited about this organization: Our group was formed last year and yet in that short amount of time, we have received such a diversity of interest. So many talented, and for a lack of a better term, Richmond-esque people have taken ownership of the process to really move the needle on restoring the building and grounds.

What motivated me to get involved in community service: I felt like if I don’t do this, no one will. I also felt certain if there was simply a place for people to send a check, a website that popped up when people Googled “Pump House” after coming to the park, a way to collect and focus all the interest that the building naturally inspires, that the building would be able to become something new, something very unique to Richmond.

Where is the Pump House located: The Pump House is located off Pump House Drive at the far southern end of Byrd Park. If you take your last right before crossing the James River to the South Side over the Nickel Bridge, you’ll come upon it.

Current condition: The building has many needs, including serious roof and gutter repair, water and sewer hookups and adherence to ADA accessibility laws, or an exemption. But it is built of local granite and was meant to last forever. It is not beyond repair but needs significant funding and experts in a variety of fields.

Prospects for achieving vision for building’s future: We have raised more than $30,000 in nine months. We have integrated ourselves into the existing nonprofit’s framework and we have Councilman Parker C. Agelasto’s and the local community’s support. Many local businesses have thrown fundraisers for us and have given us their support. I would say as long as we have the community and the city’s support, we have a real chance. But many barriers still exist that should not be underestimated.

How I see Pump House in five years: I see the building open to the public. Events are held such as concerts, paint parties, historic tours, field trips from local schools, weddings, theater and many other uses — whatever the diverse and artsy community of Richmond wants. It is a public park and a public works building after all.

Number of people aware of Pump House: Fewer than there should be. Some people have grown up in Richmond and have never heard of it. Increasing that is a major goal of our group.

How I recruited people to help: Through the planning process required for my professional plan with the City of Richmond and VCU, I established many stakeholders and interested people. From there, people who came out and wanted to help were encouraged to help in any capacity they felt they could. The building needs everything, so if you have a skill, we can use it!

How to become a volunteer: Reach out on our website, www.friendsofpumphouse.org. We have a get involved submission form online, or simply show up to one of our board meetings or public cleanup days.

How I start the day: I like to walk my dog Charlie, drink a cup of coffee and start in on everything. Productivity comes from attacking. I try and be tenacious and carry that mindset into everything I do. But first coffee and dog walk, or else I’ll go insane.

Perfect day for me is: Waking up in a new place and getting to decide what to do with my day and having no plans. Maybe it’s somewhere in Spain or a small town in West Virginia. That could be hiking or trying a new coffee shop or playing my tuba in a new park or just watching the clouds pass. Life is so busy. Time to reflect, spend time with loved ones, explore and do what feels right is so hard sometimes. You have to fight to get that freedom.

If I had more time, I would: Play my tuba a lot more.

A quote that I am inspired by: “Change is the law of life. And those who look only to the past or present are certain to miss the future.” – John F. Kennedy

Outlook at start of day: Time to get up and go! But boy, I could use a few more hours of sleep.

Best thing my parents ever taught me: You are responsible for who you want to be. I got a “C” in my first quarter of high school as a freshman. I was only allowed to get As and Bs and my sisters were straight-A students. My parents were always really disappointed in me when I messed up and grounded me. But I’ll never forget that C because my mom simply shrugged her shoulders and said, “You already know what I’m going to say — ‘You can do better’ — but you know that. You want to be a C student, that’s fine. You’re old enough to make your own decisions. You choose who you are and what you accomplish. If you work at it, that can be whatever you want it to be.” From that point on, I tried hard at everything I did.

Person who influenced me the most: My dad, Joe Costello.

The book that influenced me the most: “The Picture of Dorian Gray” by Oscar Wilde.

What I’m reading now: “Falls of the Rappahannock” by Dr. William “Bill” Trout.

The one thing that I’ve learned in life is: Enjoy it.

My next goal: Restore my basement into a stellar man cave, complete with pool table.