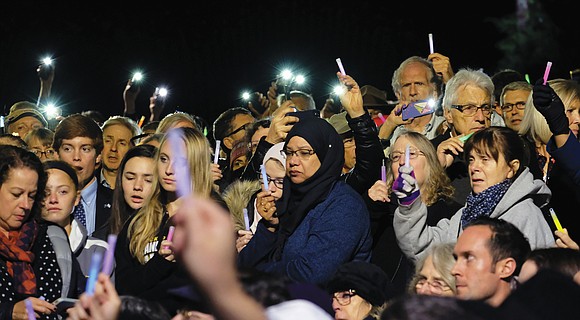 Hundreds of people of different faiths, races and backgrounds raise lights of hope at the end of Tuesday night’s vigil at the Weinstein Jewish Community Center on Monument Avenue. Photo by Sandra Sellars Richmond Free Press 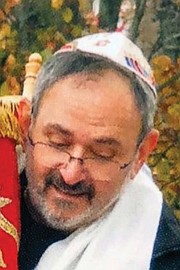 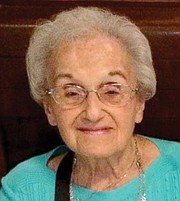 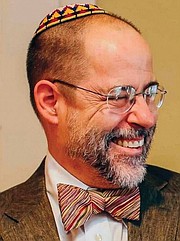 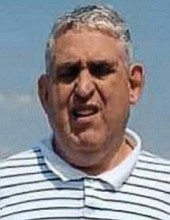 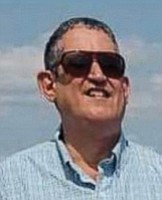 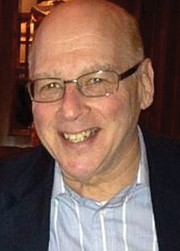 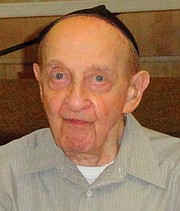 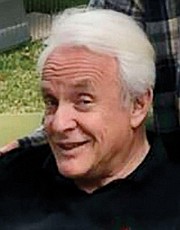 Funeral services were held Tuesday for a beloved family doctor, a pillar of the congregation, and two middle-aged brothers known as the Rosenthal “boys.”

Among the mourners at the Rosenthal brothers’ funeral was Dr. Abe Friedman, who typically sat in the back row of Tree of Life with the two men but was late to synagogue on Saturday and was not there when the gunman opened fire.

As he stood in line at the funeral, Dr. Friedman wondered why he had been spared.

“Why did things fall into place for me?” he asked. “I usually sit in the back row. In the last row, everyone got killed.”

Earlier in the day, thousands of mourners jammed a synagogue, a Jewish community center and a third, undisclosed site for the first in a weeklong series of funerals for victims of the deadliest anti-Semitic attack in U.S. history.

Dr. Jerry Rabinowitz, Daniel Stein and brothers Cecil and David Rosenthal were among the 11 people killed in the shooting rampage at the Tree of Life Synagogue on Saturday.

The alleged shooter, Robert Bowers, 46, was indicted Wednesday by a federal grand jury on 44 counts, including hate crimes. Prosecutors previously indicated they plan to seek the death penalty.

Mr. Bowers remains in jail, ahead of his arraignment, which was to be held Thursday.

According to authorities, the self-employed truck driver expressed hatred of Jewish people while firing his weapon and later told police, “I just want to kill Jews” and “All these Jews need to die.”

Authorities said Mr. Bowers went into the synagogue armed with an AR-15, a fast-firing semiautomatic weapon used in many of the nation’s mass shootings, and three handguns. A resident of the Baldwin suburb of Pittsburgh owned the guns legally and had a license to carry them.

Mr. Bowers was wounded in a shootout with police as he sought to flee the scene. He made his first appearance in court Monday in a wheelchair. He was wearing a blue shirt and handcuffs in facing initial charges that ensured he would not be released on bail.

Since the hate-filled incident, communities across the nation, including Richmond, have shown overwhelming support of the Squirrel Hill synagogue with vigils, donations and prayers. Pennsylvania’s Muslim communities had raised more than $140,000 by Tuesday for the victims of the attack and their families.

“We just want to know what you need ... If it’s people outside your next service protecting you, let us know. We’ll be there,” Wasi Mohamed, executive director of the Pittsburgh Islamic Center, told mourners at an interfaith gathering in Pittsburgh on Monday.

The NFL Pittsburgh Steelers held a moment of silence on Sunday before their game against the Cleveland Browns. After the game, Coach Mike Tomlin, who lives near the synagogue, urged players and the heartbroken city to “stay strong.”

With Tree of Life still cordoned off as a crime scene on Tuesday, more than 1,000 people poured into Rodef Shalom, one of the city’s oldest and largest synagogues, to mourn the Rosenthal brothers, ages 59 and 54.

The two intellectually disabled men were “beautiful souls” who had “not an ounce of hate in them — something we’re terribly missing today,” Rabbi Jeffrey Myers, a survivor of the massacre, said at their funeral.

Rabbi Myers, his voice quivering, told the Rosenthals’ parents and other family members: “The entire world is sharing its grief with you, so you don’t walk alone.”

The brothers were widely known as “the boys,” the Rosenthals’ sister, Diane Hirt, noted. “They were innocent like boys, not hardened like men,” she said.

She said Cecil — a gregarious man with a booming voice who was lightheartedly known as the mayor of Squirrel Hall and the “town crier” for the gossip he managed to gather — would have especially enjoyed the media attention this week, a thought that brought laughter from the congregation.

Dr. Rabinowitz’s funeral was held at the Jewish Community Center in the city’s Squirrel Hill section, the historic Jewish neighborhood where the rampage took place. Two police vehicles were posted at a side door and two at the main entrance.

A line stretched around the block as mourners — some in white medical coats, some wearing yarmulkes, black hats or headscarves — passed beneath the blue Romanesque arches into the brick building.

Dr. Rabinowitz, 66, was a go-to physician for HIV patients in the epidemic’s early and desperate days. Unlike others who shunned sufferers, he always hugged his patients as they left his office.

“A lot of people are feeling really angry about this. A lot of rage built up inside about this because of it being a hate crime. But I’m so overwhelmed with sadness that I can’t even be angry right now,” said Robin Faulkner, whose family had seen Dr. Rabinowitz for 30 years and counted him as a dear friend. “It’s just such a loss. Just tragic.”

A private funeral was also held in a Jewish community center for Daniel Stein, the 71-year-old men’s club president at Tree of Life.

Other victims’ funerals have been scheduled through Friday.

Near the synagogue, flowers, candles and chalk drawings filled the corner, including a small rock painted with the number “6,000,011,” adding the Pittsburgh victims to the estimated number of Jews killed in German death camps during World War II.

Anger over the slayings targeted President Trump and his family when they traveled to Pittsburgh to deliver condolences.

When Air Force One touched down at the airport outside Pittsburgh, the president and his party disembarked without being greeted by the usual phalanx of local officials that typically welcomes the nation’s leader, a reflection of the controversy surrounding the visit.

As the president’s motorcade traveled to pay respects, it passed hundreds of shouting, chanting protesters with signs such as “It’s your fault” and “Words matter,” a reference to allegations President Trump’s has used his position and his speeches to embolden bigots.

Upon arrival at the synagogue, the first family laid white roses as well as stones for each of the dead, a Jewish burial tradition. The president and First Lady Melania Trump went to a hospital to visit with survivors. They were joined by the president’s daughter, Ivanka Trump, and her husband, Jared Kushner, as well as Rabbi Myers of the Tree of Life, and Israeli Ambassador Ron Dermer.

The Trumps later spent more than an hour at the University of Pittsburgh Medical Center, where some of the victims are recovering.

Inside, the president visited with wounded police officers and injured congregants but did not appear to meet with relatives of the deceased.

Democratic Mayor Bill Peduto had asked President Trump not to come while the city was burying its dead. He and Pennsylvania Gov. Tom Wolf, a fellow Democrat, said they would skip the president’s visit.

“Community leaders expressed to the governor that they did not feel it was appropriate for Trump to come, so the governor made a decision not to join him on his visit out of respect for the families and the community,” said Beth Melena, the governor’s campaign spokeswoman.

The White House had invited the top four congressional leaders to join President Trump in Pennsylvania, but none accompanied him.

Squirrel Hill resident Paul Carberry said President Trump should not have visited until the dead were buried.

“He didn’t pull the trigger, but his verbiage and actions don’t help,” said Mr. Carberry, 55, who wore anti-Trump patches on his hat and jacket.

“I don’t think focusing on Trump is the answer,” said Ms. Marcus, a 34-year-old nurse and Trump supporter who had hoped to catch the presidential motorcade with her young sons but just missed it.