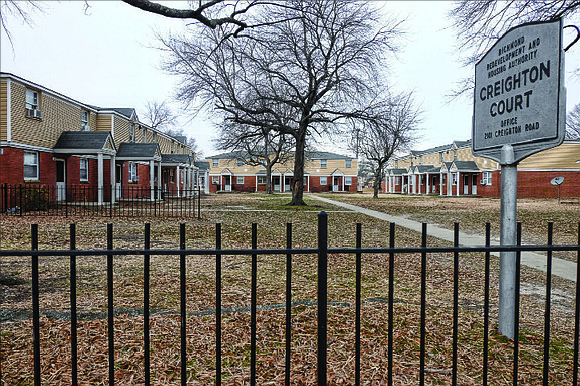 This is a view of a portion of the 504-unit Creighton Court public housing community in the East End that has served low-income and working families since 1952. Photo by Sandra Sellars Richmond Free Press

The city’s key public housing agency is rethinking its vision of demolishing the six major public housing communities in Richmond and replacing them with “mixed-income” neighborhoods to end the concentration of poverty.

Amid rising costs of construction that have pushed the price tag for building new apartments to around $250,000 a unit, the Richmond Redevelopment and Housing Authority is considering remodeling existing units at a fraction of that cost and keeping them in place as a major element of affordable housing for the city’s poorest residents.

RRHA is undertaking a study to determine the feasibility of renovating most, if not all, of the estimated 3,300 apartments in Fairfield Court, Gilpin Court, Hillside Court, Mosby Court and Whitcomb Court, according to Orlando C. Artze, RRHA’s interim chief executive officer.

He said there could be a mix of new construction and remodeling in some places, depending on the condition of various buildings. But he indicated that the communities that thousands of families call home are no longer demolition targets.

Adopting a remodeling approach would not only cut costs, but would reduce the time to modernize the units from 30 years to 10 to 15 years, Mr. Artze said.

Sticking with a new construction approach, he said, would mean that it would take “at least 30 years” to replace all of the aging public housing units that are near the end of their useful life.

Mr. Artze disclosed the remodeling approach after joining Mayor Levar M. Stoney and other dignitaries on Tuesday in officially starting construction of Church Hill North, a development of 256 new apartments and single-family homes in the 1600 block of North 31st Street, the former home of Armstrong High School.

The upbeat ceremony celebrated the launch of building the first 105 apartments. Those include 45 units of new public housing for seniors now living in Creighton Court and 60 units of affordable housing, including 13 units of public housing for families in Creighton Court. Forty-seven units would be for individuals and families with household incomes at 50 percent or less of the Richmond Metro area’s median income of $83,600 a year.

By next summer or fall, RRHA’s development partner on the project, The Community Builders of Boston, expects to develop 115 additional apartments. The second phase would include another 45 units for elderly public housing residents, 15 units for Creighton families and 55 units for individuals and families with incomes below $41,600 a year.

The Community Builders hopes to have the planned 36 single-family homes completed by 2021, according to Juan H. Powell, TCB’s Mid-Atlantic director of development.

“I am standing on the grounds of a new beginning,” said Marilyn Olds, president of the Creighton Court Tenants Association and an RRHA board member for 14 years, in summing up the meaning of Tuesday’s start.

But the effort is costly, and the financial wizardry that involved government agencies and private banks to make it happen over the past two years has led to the reconsideration of what comes next.

That’s in line with the cost of development for market-rate apartments, but has forced RRHA to reconsider its plan to move people from Creighton Court to the new units and then to redevelop Creighton Court by tearing down the old and building anew.

Publicly, that has been the approach the city and RRHA advanced in showcasing Creighton Court as the model that was to be followed to replace the rest of the aging public housing units in the East End, Jackson Ward and South Side.

During the past three years, Creighton Court residents participated in workshops to help design the new community that was to replace the old units.

But the projected $125 million cost just to replace the 506 units in Creighton is giving RRHA heartburn.

The five years it took to develop and start the Armstrong project shows that it would take decades to get all of the public housing units replaced with new buildings.

Mr. Artze said the renovation model would allow RRHA to move much faster using a mix of bond financing, tax credits and government aid while also sharply cutting the cost.

Mr. Artze suggested that modernizing the current public housing might require an investment of $50,000 to $60,000 a unit, or less than 25 percent of the cost of building new units.

By shifting the focus to remodeling and improving existing units, RRHA could work on 200 units a year, he said, meaning all of the units could be modernized in 10 to 15 years.

He said the study should be done next spring and would give the RRHA’s board the information needed to fully consider this approach.