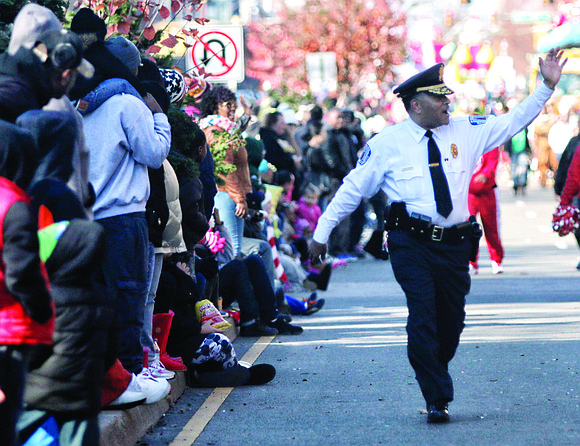 Chief Durham waves to the crowd as he takes part in Richmond’s 2015 Christmas Parade. In typical fashion, he is walking, rather than riding, along the two-mile route. Photo by Sandra Sellars Richmond Free Press 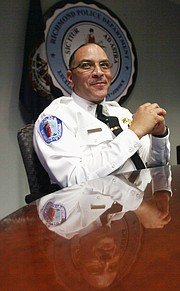 In this photo, Richmond Police Chief Alfred Durham contemplates his new post on Feb. 18, 2015, shortly after taking over leadership of the city Police Department.

“I’m done. I don’t have another position waiting.”

His decision will cost the city a chief who seemed to work day and night and stumped through Richmond neighborhoods like a political candidate in his quest to reduce crime.

During his tenure, Chief Durham equipped officers with body cameras and expanded training in diversity and de-escalating tense encounters. He also was a tough taskmaster who demanded officers meet high standards.

He created a special unit to patrol public housing communities and worked with outside partners, from neighboring police departments and the State Police to the Attorney General’s Office. He also ensured officers and detectives worked closely with city prosecutors.

He was the first to defend Richmond officers facing what he considered unwarranted public criticism. But he also quietly fired more that 25 officers that internal investigations showed were abusive or who had committed serious infractions.

Chief Durham will leave behind a department that remains short-handed, but has won national recognition for solving homicides, dealing with protests and securing the public’s trust. Unlike Baltimore, St. Louis, Cleveland and Chicago, Richmond has not faced widespread accusations of police abuse during his tenure or sustained public uproar over police shootings.

As part of his efforts to go beyond policing, Chief Durham expanded department efforts into community programs and embraced private efforts, such as the basketball program run by the RVA League for Safer Streets.

“We’re public servants,” he once said in spelling out the philosophy he sought to live by and worked to get his officers to embrace. “I tell my folks — and I am very adamant about this — if you don’t have a servant’s heart, maybe you’re in the wrong business. We have to care about people.”

Still, Chief Durham is looking forward to spending more time with his family and leaving behind the stress of the job.

Known for speaking directly and responding as honestly as he could, he told those who asked that he usually got little sleep. His rest was often interrupted by calls or by a flood of fresh ideas. One constant stress was the challenge of manpower.

Just a few days before Tuesday’s announcement, Chief Durham was worried about the department’s continuing struggles to reach its authorized strength and the increasing difficulties that his successor could face.

In comments to a South Side audience last week, he said the department is authorized for 754 officers, but that week could deploy only 658 sworn personnel, including detectives and other specialists, to handle the daily flood of calls for service.

He said the department has fewer officers in part because some on the rolls are recruits in training; others are recovering from injury, are away serving in the military, are facing discipline or are on other kinds of leave.

But the main reason for the diminished strength, he said, involves the departure of officers for better-paying opportunities.

“We’ve already lost 50 officers this year due to retirements and resignations, and I have 10 more people who will retire or resign by the end of the year,” he said.

He said a recruit class will soon graduate and fill some of the holes once they get through their street training. Another class has begun training, he said. But he said he is always playing catch-up.

He expects the problem to worsen based on what he heard at a recent gathering of police chiefs. He said the chiefs received projections that fewer men and women are seeking law enforcement careers. Estimates are that within five years, departments across the country “will be facing a shortage of people willing to serve.”

Chief Durham said Richmond could face bigger problems because the starting annual pay of $41,000 trails that of the VCU Police Department, as well as those in Henrico and Chesterfield counties.

He said that issue remains unresolved even after City Council spent more than $25 million over three years to upgrade the pay scale so that veterans can make more than rookies.

The reality for Richmond is that “we’re training them and other departments are getting the benefit,” he said.

But that will be a problem for the next person who fills the top cop role.

He made his first stop in Richmond in 2005 when then-Chief Rodney Monroe tapped him to be his chief of staff.

Chief Durham led Chief Monroe’s effort to install community policing and break the city down into four precincts and 12 sectors to enable officers to get closer to the people they serve.

After Chief Monroe was tapped to lead the Charlotte-Mecklenburg Police Department, Chief Durham returned to Washington in 2007 and served for seven years as the No. 2 officer in that department before retiring in 2014.

Mayor Dwight C. Jones brought him back to Richmond in November 2014, first to serve as a deputy chief and then to take over after then-Chief Ray Tarasovic retired in early 2015.

In the announcement of his retirement, Chief Durham did not mention the wear-and-tear of the job.

“Public service is, and has been, my life,” he stated. “It has been my highest privilege to serve the men and women of this department and the citizens of this great city. I would like to thank Mayor (Levar M.) Stoney for believing in me and for his unwavering support in allowing me the opportunity to strengthen the department and its bonds to the community.

“It has been both an incredibly challenging and rewarding career for me.”

Chief Durham said he is retiring at a time when the department has received national recognition and has “a great team of employees who are doing remarkable work each and every day.”

He noted that as of November, homicides are down 21 percent and violent crime is down 9 percent compared with the same period in 2017.

“I feel that now is the ideal time for me to focus on my personal life and to begin spending quality time with my family,” said Chief Durham, who still grieves for his brother, Kenzell Durham, who was murdered at the auto shop where he worked in Washington in 2005 by an angry customer.

“Chief Durham deserves our deepest respect and sincere appreciation for his tireless commitment to our city,” Mayor Stoney stated.

“He has always been a 24-7 chief,” Mayor Stoney continued. “Whether at a community meeting or crime scene, a street festival or a street protest, day or night, the residents of this city could always count on him to be there.

“Chief Durham gave blood, sweat and tears to this department, and Richmond is a better place because of his service. We wish him all the best in the next chapter of his life.”

Mayor Stoney stated the city would select an interim chief once Chief Durham departs and will conduct a national search for his successor.