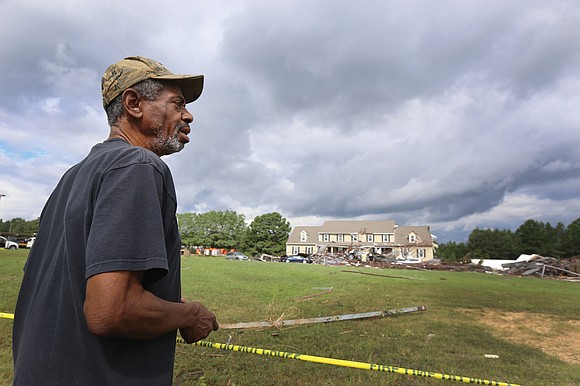 Earnest Claxton of Richmond surveys the damage in his former Chesterfield County neighborhood on Tuesday after learning about the destruction in the area caused Monday by tornadoes spawned by remnants of Hurricane Florence. Photo by Regina H. Boone Richmond Free Press

A 60-year-old man was killed in the Old Dominion Floor Co. building near Hull Street Road and Speeks Drive when the building collapsed during the tornado.

Ominous tornado warnings issued around 3:45 p.m. set off cell phones and sirens throughout the metro area, sending people to basements and interior rooms seeking cover from the many funnel clouds spotted from Chesterfield to Hanover.

Schools across the area went on lockdown, keeping students well past their normal dismissal time until the danger passed.

The National Weather Service reported five tornadoes touched down in the area, toppling trees into cars and homes, ripping roofs off buildings and sending debris swirling.

One, a category EF2 twister with estimated 120 mph winds, touched down off Hull Street Road between Genito and Courthouse roads, tearing the roof off Old Dominion Floor Co. in the 3300 block of Speeks Drive.

Cars and first floors of homes are submerged Monday in Fayetteville, N.C., in the aftermath of Hurricane Florence.

Authorities said floor company employee Ronnie Bishop, 60, who was trying to take cover with other workers, was killed when the building collapsed.

It was the first deadly tornado in Metro Richmond since the 1990s.

West of Richmond in Louisa County, Edward Kelih Jr., 59, was killed when his 2003 Toyota Tacoma truck was swept away by rushing water as he tried to cross the flooded Rock Quarry Road. The truck overturned and the cab was submerged in the water, State Police said. The truck, with Mr. Kelih’s body inside, was found about 1:55 a.m. Tuesday.

The James River crested Wednesday morning at 15 feet, about 3 feet above flood stage at the city’s Westham gauge, and officials continued to keep an eye out for any flooding as the waters began receding.

Residents in Fayetteville step out of a high-water vehicle that police used to rescue them Sunday as flooding hit their neighborhood from Hurricane Florence.

More than a dozen trees were reported down in Richmond, primarily in the Brook Road and Laburnum Avenue area in North Side and the area of South Side around Jahnke Road and Forest Hill Avenue. Chainsaw crews from the city Department of Public Works were making the rounds Wednesday to clear the trees.

Dominion Energy reported 11,000 customers without power in the Richmond and Tri-Cities area at the height of outages on Monday afternoon and evening, with about 600 customers still in the dark Tuesday evening.

Many people gave Mayor Levar M. Stoney and Gov. Ralph S. Northam high marks for the city and state’s early response to Hurricane Florence, which headed toward the East Coast last week, threatening a 500-mile-wide swath from South Carolina up to Virginia. It dropped from a Category 4 storm to a Category 1 threat when it struck landfall late Thursday night around Wilmington, N.C.

After it became clear that Virginia largely would be spared Hurricane Florence’s wrath, Gov. Northam’s mandatory evacuation order for people living in low-lying portions of Hampton Roads and the Eastern Shore was lifted last Friday, allowing the more than 245,000 people affected to return home.

Residents in many North Carolina communities bared the brunt of the storm, with major flooding forcing people to be rescued from their homes in New Bern, Lumberton and Fayetteville.

At least 37 storm-related deaths have been reported, including 27 in North Carolina and eight in South Carolina, several of whom were killed when trees fell on their homes.

Thousands of people have been displaced and several communities, including Wilmington, N.C., are isolated as Interstate 40 and other roads have been flooded.

Crew members from the city Department of Public Works use chainsaws and heavy machinery to clean up downed trees and storm debris Tuesday along Lamont Street near Laburnum Avenue in North Side.

President Trump, who toured devastated areas of North and South Carolina on Wednesday, pledged strong federal support for the recovery.

“We’re going to be there 100 percent,” he told officials at a briefing shortly after arriving at the Marine Corps Air Station Cherry Point in Havelock, N.C. “... There will be nothing left undone. You’ll have everything you need.”

President Trump then visited a church in New Bern, a town of 30,000 located at the confluence of the Neuse and Trent rivers that was hit especially hard by flooding, and joined volunteers in distributing boxed meals to residents in a drive-through line. He also walked through a neighborhood lined with discarded wet furniture, hugging residents and posing for pictures.

A crew works to restore power to businesses located near a store in Chesterfield County that was wrecked Monday when a tornado struck. The furniture store on Hull Street Road and Speeks Drive partially collapsed in the storm.

The 55-year-old owner of the NBA’s Charlotte Hornets is contributing $1 million each to the American Red Cross and the Foundation For The Carolinas’ Hurricane Florence Response Fund, according to a news release issued Tuesday.

In addition, more than 100 members of the Hornets organization will help pack disaster food boxes Friday at Second Harvest Food Bank of Metrolina in Charlotte, N.C. The food boxes, which provide individual meals, will be shipped to Wilmington, Fayetteville and Myrtle Beach, S.C., and distributed to those who have been directly impacted by the hurricane. The goal is to deliver 5,000 food boxes.

Fanatics, the NBA’s merchandising partner, is selling “Carolina Strong” T-shirts with 100 percent of the proceeds going to the foundation’s fund for hurricane relief.