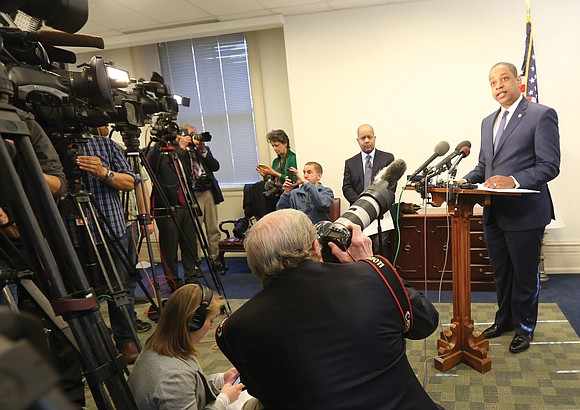 Lt. Gov. Justin E. Fairfax discusses the results of his two polygraph tests during a news conference on Wednesday at his office in Capitol Square. He did not take questions from reporters. Photo by Regina H. Boone Richmond Free Press

After two women appeared on national television this week accusing him of sexual assault, Lt. Gov. Justin E. Fairfax released results of polygraph examinations that he says exonerate him.

At a news conference Wednesday in his office in Capitol Square in Downtown, Lt. Gov. Fairfax asked prosecutors to investigate the allegations. He also pledged his full cooperation.

“These allegations, if true, would be incredibly serious,” the 40-year-old lieutenant governor said. “Because they are not true, however, they are incredibly hurtful to me and my family and my reputation, which I have spent a lifetime building.”

In February, Dr. Vanessa Tyson, a professor at Scripps College in California, went public with an allegation against Lt. Gov. Fairfax, saying he forced her to have oral sex in a Boston hotel room while the two were attending the Democratic National Convention in 2004. The lieutenant governor was a law student at Columbia University at the time.

Then a second woman, Meredith Watson of Maryland, accused Lt. Gov. Fairfax of raping her in 2000 while the two were undergraduate students at Duke University.

Since the women went public with their accusations, Lt. Gov. Fairfax has maintained that he is innocent, saying both encounters were consensual. He said he is the victim of a “vicious and coordinated smear campaign,” and in a speech in late February on the floor of the state Senate, he compared himself to lynching victims during the Jim Crow era.

In separate interviews with Gayle King on “CBS This Morning” airing Monday and Tuesday, Dr. Tyson and Ms. Watson shared their stories with a national television audience.

At the news conference, Lt. Gov. Fairfax said he does not believe television interviews are the right vehicle to get at the truth.

“Sensationalizing allegations does not make them true,” he said. “Yet airing salacious allegations without evidence does enormous damage.”

Lt. Gov. Fairfax then spoke about each of the allegations, reiterating that both sexual encounters were consensual. He was single when he met Ms. Watson and Dr. Tyson. He is now the married father for two young children.

“I have heard Dr. Tyson say that I held her neck and physically forced her to engage in sexual contact,” Lt. Gov. Fairfax said. “That is simply not true.”

In addressing Ms. Watson’s allegation, Lt. Gov. Fairfax stated that the two “were both willing participants.”

“At no time before, during or after our encounter did she ever say or do anything that suggested to me in any way that she believed that she thought anything that happened between us was something she had not wanted or that she was uncomfortable with,” he said.

The lieutenant governor then announced he was happy to release the results of polygraph examinations that he said show he passed with respect to the allegations.

“Today, I am providing the full report of my polygraph examinations to the media so that all Virginians can read the report themselves,” he said.

The examinations, conducted by Hanafin Polygraph Services of Arlington, included questions such as “Did you engage in any non-consensual activity with Vanessa?” and “Did Meredith give you any physical or verbal indication she did not want to have sexual contact with you?”

The report concludes with a statement from Alan J. Jennerich of the American Polygraph Association. Mr. Jennerich stated that in his professional opinion, “Fairfax’s responses to the above relevant questions are not indicative of deception.”

Lt. Gov. Fairfax repeated his request for investigations by law enforcement professionals. He noted that his attorney has contacted the district attorney’s offices in Boston, and Durham, N.C., where the encounters took place.

“My attorney has made clear to both offices that I will cooperate fully in these investigations and has told each office that I will make myself available to them to answer any and all questions they might have, including under oath and penalty of perjury,” Lt. Gov. Fairfax said.

He said he looks forward to clearing his name and returning to work for the people of Virginia. He left the podium promptly and did not respond to reporters’ questions as he exited the room.

The allegations against Lt. Gov. Fairfax have become a political issue at the Capitol. On Tuesday, House Speaker Kirk Cox, a Republican from Colonial Heights, said attorneys for Dr. Tyson and Ms. Watson indicated that the women “are prepared to share their accounts at a legislative hearing, but only if there is bipartisan cooperation to conduct the hearing.”

“Unfortunately, despite the compelling accounts we have heard from Dr. Tyson and Ms. Watson on television in recent days, Del. Filler-Corn has made clear that she will not agree to a bipartisan General Assembly hearing of any nature,” Delegate Cox said.

In a letter to Delegate Bell, Delegate Filler-Corn called the allegations “extremely serious” and noted that the House Democratic Caucus has called on the lieutenant governor to resign.

“Law enforcement officials are best equipped to investigate these matters, and we certainly would not want to harm their inquiries or deny due process to either the complainants or the Lieutenant Governor by conducting a hearing that could easily be exploited for political purposes,” Delegate Filler-Corn’s letter stated.

She added, “We do not believe that the House of Delegates, or any selection of legislators, is the appropriate body to hear these serious allegations.”

“And while our Republican colleagues claim to have worked for a bipartisan path forward, time and again they have proven that the media headlines are more important to them than due process or justice,” she stated.

“Each of the Republicans’ supposed attempts at bipartisanship have been nothing more than a gimmick to generate partisan fodder in the news and on social media.”