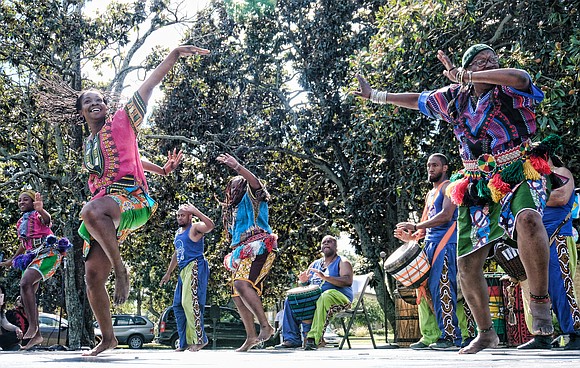 Richmond’s longest running African dance company is shortening its name as it prepares to mark its 46th year with its fourth annual fundraising dinner-dance on Saturday, May 4, it has been announced.

In advance of the black-tie fundraiser, the Ezibu Muntu African Dance Company that was born in 1973 on the campus of Virginia Commonwealth now plans to call itself just Ezibu Muntu.

Tanya Dennis, founder and current general manager of the group, said the shorter name better reflects the company’s expanded mission that includes offering theater, music and education along with dance.

“We are no longer just a dance company,” Ms. Dennis said. “So we’ve simplified the name and adopted a tagline that better reflects the expanded mission: ‘Dance, Education and Culture.’ ”

The mission expansion is happening, she said, as the company seeks to find a new home in Downtown. After years in the 400 block of East Main Street, the company relocated to South Side in the past two years.

Ms. Dennis said the goal is to raise the money to buy a property, hopefully in the Arts District, to offer the varied programs of the company. She said fundraising is moving closer to the goal.

Once it opens, the Ezibu Muntu center would provide African-centered education and experiences to young people and the larger community, with additional programming for seniors and health advocates, she said.

Ms. Dennis took over as general manager of the company since returning to Richmond in September. She credits four people with maintaining the dance company after she left in 1975.

Two, Renee Knight and Faye Walker, are VCU alumnae who got their start in African dance while studying with Ms. Dennis and took on the task of turning Ezibu Muntu into a continuing community organization after they graduated.

The two others are Roderick Davis and Babdunjo Olgunké, protégés of Ms. Knight and Ms. Walker. Ms. Dennis said the two men have kept “the group viable and artistically solvent for 30 years” as dance teachers committed to maintaining the artistic integrity.

The fundraising dinner-dance will be held 7 to 11 p.m. at the Dewey Gottwald Center at the Science Museum of Virginia, 2301 W. Leigh St. Tickets are $70.

“We are asking the public to support our growth and our mission as we seek to assist our youths to become better, more productive citizens by teaching them their culture, showing them their power and supporting their potential,” Ms. Dennis said. “The public’s generous donations and participation at our gala will help us achieve the creation of our center where we can assist even more young people.”