Head of the class! 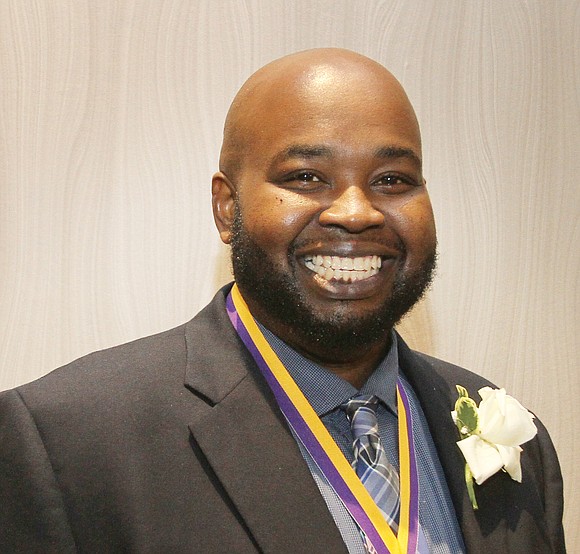 Rodney A. Robinson, the 40-year-old history and social studies teacher who inspires students each and every day inside the Richmond Juvenile Detention Center, where he has worked at the Virgie Binford Education Center since 2015, has been named 2019 National Teacher of the Year.

The announcement was made to a national television audience Wednesday on “CBS This Morning,” where Mr. Robinson was interviewed on the show’s New York set by Gayle King.

He was chosen from a field of four finalists for the award presented by the Council of Chief State School Officers and is the first Richmond Public Schools teacher — and the third in Virginia history — to receive the national title.

In the announcement, the council lauded him for creating a positive school culture by empowering his students, many of whom have experienced trauma, to become civically minded social advocates who use their skills and voices to affect physical and policy changes at their school and in their communities.

He uses a whole child approach to help his students gain the academic, social and emotional skills they need to move beyond their past mistakes and pursue their dreams for a better future, the council stated.

“Every student in this country deserves access to a teacher who is committed to their success,” said Carissa Moffat Miller, executive director of the council that identifies exceptional teachers across the country and seeks to recognize and amplify their work.

“I congratulate Rodney Robinson on this outstanding recognition and look forward to him engaging in conversations across the country about ways to address the school-to-prison pipeline and improve educational equity for all students.”

Mr. Robinson’s characteristic vibrant smile and humble attitude shined through during the interview with Ms. King, that also included video of Virgie Binford principal Ta’Neshia Ford recounting how she convinced him to come and work with the unique population of students in juvenile detention. Two of his former students — he has been teaching since 2000 — also were interviewed. Both are now teachers themselves.

In a telephone interview later Wednesday morning with the Free Press, an excited Mr. Robinson said he learned about six weeks ago that he had won the nation’s top teaching award, but had to keep it a secret until the formal announcement.

“I wanted to scream from the top of City Hall!” he said, but he shared the news only with his wife, Summer Joy Robinson, who teaches in the elementary school program for gifted students.

Mr. Robinson will receive the award May 2 in Washington as he and other state teachers of the year gather for a gala and presentation that will include a meeting with President Trump.

He will spend the next 12 months speaking at schools and educational events around the country and internationally “advocating for kids and for cultural and economic equity,” he said. “That means ensuring (students) have the resources they need to be successful and that more resources are provided to students that need them and, on the cultural front, that they have teachers that appreciate them and, if possible, look like them.”

“I want to talk about how to work with all students — that you have to love them, appreciate them and value them.

“I teach from love, empathy and compassion,” he continued, “and always try to treat each student as the most important person in my life.”

RPS Superintendent Jason Kamras, who was National Teacher of the Year in 2005 when he was working in the District of Columbia, was joyful about Mr. Robinson’s award.

“There is no one more honorable or more deserving of this extraordinary award than Mr. Robinson,” Mr. Kamras texted to the Free Press. “Mr. Robinson stands for everything we stand for at RPS.”

A native of King William County, Mr. Robinson was inspired to become an educator by his mother, Sylvia Robinson, who had an in-home day care center and taught GED classes at Richmond’s Armstrong High School when he was growing up in Church Hill.

He was chosen 2018 RPS Teacher of the year in November 2017, and was recognized as the 2019 Virginia Teacher of the Year in October during a ceremony where he was brought to tears. He talked at the time about how he has his students at Virgie Binford engage in volunteer work to help them understand the need and importance of giving back to the community.

Among their volunteer work: Voter registration drives, work with Boys and Girls Clubs, cleanup efforts at historical African-American cemeteries and at the former Lumpkin’s Jail site in Shockoe Bottom, a former slave pen that in 1865 became a school and the origins of Virginia Union University. He considers the experiences a part of the life experiences that students can learn from.

“You always have to walk what you preach,” Mr. Robinson told the Free Press on Wednesday. “I always try to model the best example for my students, co-workers and colleagues,” he said.

“This year, I hope to be the voice for my students and all students who feel unseen, unheard, unappreciated and undervalued in America.”

The three other finalists for 2019 National Teacher of the Year were Donna Gradell of Oklahoma, Kelly Harper of Washington, D.C., and Danielle Riha of Alaska.