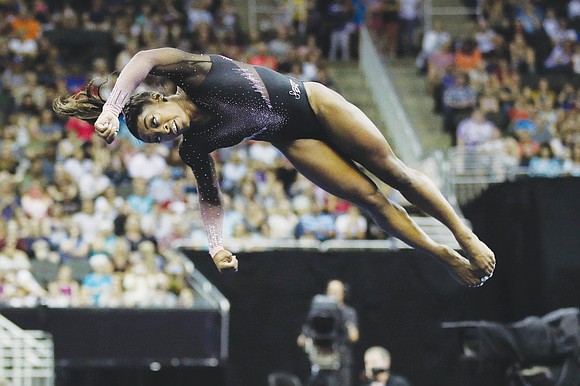 Four-time Olympic gold medalist Simone Biles reasserted her position as the world’s unrivaled No. 1 gymnast with an amazing winning performance Sunday at the U.S. Gymnastics Championships in Kansas City, Mo.

The 22-year-old Biles clinched her sixth national gymnastics title with a historic double-double dismount on the uneven bars during competition on Friday night, followed by an even more historic triple- double during her floor routine on Sunday.

Biles became the first woman to attempt — and land — a triple- twisting, double back maneuver during her floor routine Sunday night. Her “triple-double,” as it is called, served as the exclamation point of the night, with the packed arena applauding wildly after witnessing Biles redefining what’s possible in the sport.

However, Biles was not quite content even with that unprecedented move.

“It wasn’t as good as in some of the trainings,” Biles told reporters afterward. “I’m just happy that I landed it because I feel like after night one, my confidence got shot down. So I was really worried about it going into today. That’s all I could worry about. So I was really happy.”

On Friday night, Biles was on the verge of tears after she shorted her attempt at the move on the floor. But she became the first gymnast to attempt and land a double-twisting double somersault dismount on the high beam that night, Team USA noted.

“I feel like each (title) gets better and better,” Biles said, “because it’s like the fifth and, then, the sixth, so it just keeps getting more exciting.”

Biles is now two months away from a trip to the world championships — where her 20 medals are tied for the most by a female gymnast — and a year away from a return to the 2020 Olympics in Tokyo, where she is considered the prohibitive favorite.

“She’s a freaking beast,” said MyKayla Skinner, an alternate on the 2016 Olympic team who clinched a spot on the national team by finishing eighth. “Like, I don’t even understand. I always ask her, ‘Do you realize how good you are?’ And she’s like ‘Yeah, but I don’t know.’ It just comes so naturally, it’s amazing.”