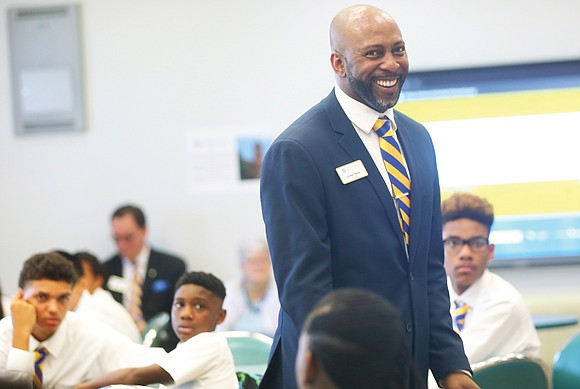 When the bell rang at 7:45 a.m. Monday, 96 ninth-grade students began the inaugural school year at Cristo Rey Richmond High School, a private school that promises opportunities for some of the area’s poorest youths through a rigorous, college preparatory curriculum combined with an unconventional work component that seeks to give them a boost in the job market.

Located at 304 N. Sheppard St. inside the former Benedictine High School, Cristo Rey is “part of a network of 37 schools across the United States,” explained Peter McCourt, president and chief executive officer of the Richmond school. “Nationally, Cristo Rey schools have produced about 15,000 graduates, with a 100 percent college acceptance rate.”

Cristo Rey is a Catholic school whose goal is to educate “young people of limited economic means to become men and women of faith, purpose and service,” according to its mission statement.

“We are a faith-based, Catholic learning community,” Mr. McCourt said, “but we welcome students of all faiths. They do not have to be Catholic to attend.”

Cristo Rey opens in Richmond at a time of academic uncertainty, with public schools in the metro area garnering both nationwide honors and statewide embarrassment and facing money troubles and plans to replace and/or renovate many of the worn out buildings.

Cristo Rey will serve grades nine through 12. Academic lessons are based on Common Core and Virginia education standards; the school will award its graduates advanced diplomas.

It is based on a school model begun in 1995 in Chicago by Father John P. Foley, and incorporates a work-study program where corporate partners of the school employ students.

Working in teams of four, Cristo Rey students share one job, with each student working five full days per month. The program is designed so that students will not miss class while working. The students’ income is directed to the school and used to fund their tuition costs.

Dontrese Brown, vice chair of the board of directors of Cristo Rey Richmond High School, greets freshman Joshua in a welcome line set up by board members and staff on the first day.

Cristo Rey’s website explains that the Corporate Work Study Program provides students with “crucial hands-on, white collar work experience, while simultaneously empowering them to assume an active role in financing the larger portion of their education.”

The school acts as employment placement agency for their students, who are employed by the school, not the corporate partners.

Cristo Rey students will work with at least 25 corporate partners from a range of industries, including McGuireWoods, Dominion Energy, Bon Secours, Markel and Groome Transportation.

Student employee responsibilities will vary by job and industry, but may include tasks such as data entry and helping create Microsoft Excel reports for financial service jobs or filing records and assisting with fraud investigation for banking jobs.

Both Corey Taylor, the school’s principal and chief academic officer, and Amy McCracken, director of the work-study program, stressed that the program is not an internship, but a vehicle to give students real skills, connect them to potential employers and prepare them for future job markets.

A notable exception to Cristo Rey’s program is blue-collar vocational work. Mr. Taylor said this absence isn’t out of disrespect toward those professions, but simply the nature of the program and the school itself.

“That’s just not our focus,” Mr. Taylor said, “and that’s something that we’re very intentional about when we are presenting to students or to different corporations.

Ms. McCracken pointed out that the program can be a clarifying experience for students, letting them gain experience in a field before fully committing to a career path.

“It’s very different. I hope everything goes well with how this all turns out,” 15-year-old Elizabeth said Monday about her new school. (School officials did not want students’ last names to be published.) Originally from Chicago, the Richmond resident attended Saint Joseph Catholic School in Petersburg before enrolling at Cristo Rey.

While it’s a lot for any student to take in, Elizabeth and Marc, 14, said it’s been worth it so far. All students went through a three-week orientation in July.

“I like the people here. I like the teachers and just about everything about it,” said Marc, who attended All Saints Catholic School on Richmond’s North Side.

Marc and Elizabeth agreed that maintaining good grades at Cristo Rey potentially could be difficult, given the more demanding courses and the responsibility of balancing school assignments with work obligations.

“Coming through the whole three weeks of (orientation) taught me a lot of things and how to be prepared for the real world,” said Elizabeth, who learned about Cristo Rey from news reports and websites.

She said she was drawn to the opportunity to do adult-level busines work.

“I just thought that was really cool when you’re only 15,” she said.

Marc learned about Cristo Rey when representatives came to All Saints. He said he sees it as an opportunity to learn and head to college. He also was excited by the prospect of the work-study program.

“I’m 14 and I’m doing what grownups would do. I’m preparing for the future,” he said.

Cheyenne listens intently on the first day of classes at Cristo Rey Richmond High School. The school is located in the Museum District on Sheppard Street in the former home of Benedictine High School.

When college becomes the next step for Cristo Rey students, they can expect to have a lot of help. This includes a college counseling service that starts in the 10th grade and a network of 47 partner universities across the United States, all working to ensure graduates have the financial support they need when they settle down at whatever college they choose.

“The one thing that we want ultimately is for students to be successful,” Mr. Taylor said. “And so if you’re coming into a place as a student where it doesn’t feel welcoming, and you don’t feel like you can actually learn and grow, then you won’t.”

Given the community interest and the enthusiasm of its new students, Cristo Rey officials are eager to see how the school and its students will progress.

“I cannot imagine what it’s going to be like when our founding class graduates in 2023,” Ms. McCracken said. “We are all eyes on the prize — all looking forward to that day.”