VUU Panthers gearing up for a successful season

Matching or exceeding 2018 totals won’t be easy, considering a challenging schedule, but there is plenty to work with as VUU prepares for its opener on Saturday, Sept. 7, at Hampton University.

“Nothing is going to be given to us; we have to earn it,” Coach Parker said. “We finished strong but didn’t quite get in (the playoffs). We’re using that as motivation for this season.” 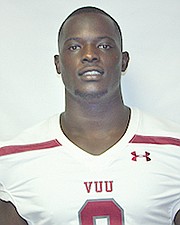 The Panthers have two of the premier players in the NCAA Division II in junior running back Tabyus Taylor from Hopewell and play-making defensive back Sterling Hammond from Essex County.

The bulldozing Taylor ran for 1,548 yards and 21 touchdowns last season, while also catching 37 passes for 355 yards and two more touchdowns.

“He does it all,” Coach Parker said. “But everyone will be gunning for him this year.”

Hammond, one of 10 returning defensive starters, is a two-time CIAA Defensive Player of the Year.

If there is any question this season, it’s about the quarterback position. Coach Parker must replace the departed Darius Taylor and his 1,768 aerial yards.

“They’re all special in their own way,” Coach Parker said. “If it’s a problem (having four), then it’s a good problem.”

Coach Parker declined to say who might be a “nose ahead” on the competition with some three weeks left of preseason.

The VUU coach said he felt a reason why VUU wasn’t selected for the NCAA football playoffs a year ago was because of a perceived weakness in the team’s schedule. To rectify that, the Panthers open at FCS Hampton University, now featuring former Florida State University quarterback Deondre Francois. The FCS is one step above Division II in the NCAA.

The Panthers’ home opener on Saturday, Sept. 14, is against rugged Lenoir-Rhyne University of Hickory, N.C., a national semifinalist a year ago with a 12-2 record.

“We wanted to take care of the schedule thing,” Coach Parker said.

The Panthers are picked to finish second in the CIAA Northern Division behind defending champion Bowie State University. VUU also is ranked 25th in a national NCAA Division II poll.

VUU couldn’t have finished 2018 much stronger. The Panthers closed the season with a 53-0 win over Elizabeth City State University, a 46-19 rout of Virginia State University and a 60-6 rout of Johnson C. Smith University.

Unfortunately, the victory over Johnson C. Smith University turned out to be the last game of the season.

The optimistic goal this fall is to play at least two more games following the regular season — the CIAA championship game and the NCAA playoffs a week later.

VUU hasn’t won the CIAA since 2001, when Coach Parker was an assistant under former Coach Willard Bailey.