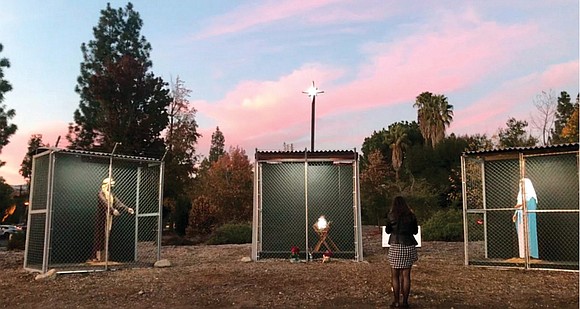 The Nativity scene at Claremont United Methodist Church is striking.

Mannequins of Jesus, Mary and Joseph are separated in individual cages topped with barbed wire. A baby Jesus is wrapped in what resembles a Mylar blanket, similar to the sheets migrants have been given in holding cells.

On a podium, a message reads: “What if this family sought refuge in our country today?”

The Rev. Martha Morales said the church’s intention was not to be controversial or political. Instead, she said, the church is trying to be faithful to its calling to do God’s work.

“Our purpose is to say, ‘This is what we believe that God is calling us to do.’ You’ve got to call out evil and lift up justice,” said Rev. Morales, associate pastor at Claremont United Methodist.

A stream of people has been visiting the church since the congregation set up the life-size Nativity scene on Dec. 7.

People have either commended or lambasted the church for its display, which does not mention President Trump but sheds light on family separation at the border. It has garnered widespread attention from progressive Christians and Conservative commentators like Tomi Lahren.

The church has received a slew of negative emails, and for safety purposes, a local police car has been stationed outside the church as visitors take photos of the Nativity scene and reflect at the site.

Some of the visitors have talked with one another at the site and pondered the role of Christianity in the immigration crisis at the border.

One woman teared up, saying the display reminded her of the 16-year-old Guatemalan migrant who died in Border Patrol custody after being diagnosed with the flu. Another described the grounds of the Nativity scene as “holy,” given the international recognition of it.

In Canada, a similar Nativity emerged in Toronto, showing a baby Jesus wrapped in a solar blanket in a cage.

Erecting Nativity scenes to declare public statements on social issues is nothing new. They’ve been used to highlight the immigrant struggle, take a stand on LGBTQ issues and to show non-religious figures like Charles Darwin and Albert Einstein.

Earlier in December, the Vatican showcased its Nativity that depicted the plight of immigrants and refugees with the statue of a man carrying his belongings as he approaches the manger. The pope’s environmental message also was underlined by the fact that the creche is entirely plastic-free.

In Boston, a church in Dedham, Mass., set up a Nativity scene that is meant to remind viewers about the impact of climate change.

Inside the glass manger, plastic bottles and other trash float past Jesus, Mary and Joseph as they are swept away in waves of blue. Beneath the water, the shepherds’ flock and the wise men’s camels are drowning. Some, though not all, of the animals already are beneath the surface of the rising tide and camels are drowning.