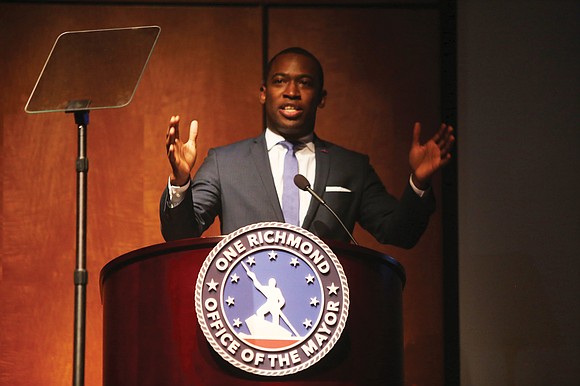 Mayor Levar M. Stoney offers highlights from his term in office and plans for the future during his State of the City address Jan. 31 at the Virginia Museum of History & Culture. Photo by Regina H. Boone Richmond Free Press

Good things are happening in Richmond, Mayor Levar M. Stoney said as he used his State of the City speech last week to tout the city’s progress during his first two years.

“Today more people are working — which is evident by the city’s 2.9 percent unemployment rate,” he said. “In addition to ongoing investments, the city has had more than $1.5 billion in investment over the past two years.

“Richmond is competing, and it is competing at a higher level than it has in a long time,” he continued to applause from an audience of about 250 people who turned out at the Virginia Museum of History & Culture on Jan. 31 to hear the 35-minute address.

But to the surprise of some observers, he barely mentioned the proposed $1.4 billion Richmond Coliseum redevelopment plan and instead put his emphasis on city efforts to expand affordable housing and on a developing a pilot program aimed at reducing one of the city’s worst features — its sky-high rate of evictions.

Rather than making a centerpiece of the proposal to replace the Richmond Coliseum in a bid to generate new development in the blocks near City Hall, the mayor brushed by it, replacing last November’s warm embrace with cautionary words.

“We need to approach the redevelopment of our Downtown with careful deliberation, no matter how long it takes — acting only when the ‘i’s’ are dotted and the ‘t’s’ are crossed,” he said.

The mayor did not offer any timeline for advancing the proposal.

“We will only move forward when we are assured a development is in the best interests of the city,” he said, adding that even then the City Council would need to reach “a similar conclusion following its own deliberations.”

The mayor quickly pivoted, talking up the work being done to add more affordable housing as he seeks to fulfill his pledge to add 1,500 units of lower-rent housing over five years.

In 2018, he noted that he participated in groundbreaking ceremonies for affordable housing developments in Jackson Ward and Church Hill. He also said he just recently cut the ribbon for 300 units of affordable housing in the Port City development in South Side, where developer Tom Wilkinson is transforming a former tobacco complex into a reduced-rent residential center.

Then for the balance of his speech, Mayor Stoney talked up a model eviction diversion effort that the city is to undertake with two nonprofit partners, Housing Opportunities Made Equal of Virginia and the Central Virginia Legal Aid Society, and the Richmond Circuit Court led by current Chief Judge Joi Jeter Taylor.

Blaming “a punitive and discriminatory state regulatory system” for the problem, Mayor Stoney announced that Richmond would have the first eviction prevention program in the state to help at least some people facing forced displacement from their residences.

To be rolled out later this year, the program would offer financial assistance to struggling tenants, he said, and also involve mediation between landlords and tenants to create binding agreements on the rent owed and a payment plan.

Under the plan, HOME would conduct financial literacy classes that would be mandatory for participating tenants, while Legal Aid is to recruit and train pro bono attorneys to serve as the mediators. A fund also is to be created to accept private donations and possibly a city contribution to provide one-time financial help.

“Through this program, our goal is to cut Richmond’s eviction numbers by hundreds of cases a year,” he said. He praised the proposal as another example of “how collaboration and partnership with the private, public and nonprofit sectors helps our city thrive.”

According to HOME, the program would be designed to serve about 500 tenants a year, still a small fraction of the estimated 6,500 evictions that take place in the city annually.

Richmond was embarrassingly listed as the No. 2 city in the country for evictions, according to a report last year by Princeton University’s Eviction Lab, which collected the data on evictions from courts from which it was available. According to the data, nearly one in three Richmond tenants receives an eviction notice each year, with about 40,000 people — one of six residents — being involved in the almost 18,000 eviction lawsuits filed annually in city courts.

Ultimately, nearly two of three of the cases, about 11,500, are settled without eviction, but the Princeton data indicated the remainder result in tenants losing their residence.

“This is what it means to be inclusive,” the mayor said. “This is what makes us more competitive. And that’s what building One Richmond is all about — investing in our people, sharing in our prosperity … and creating a place where people want to live, work and raise a family.

“Richmonders, you march, you volunteer, you organize, you celebrate, you create and you inspire,” he continued. “Our city is more than ready to move on from the past.