Portal in Monroe Park to connect Richmonders to the world 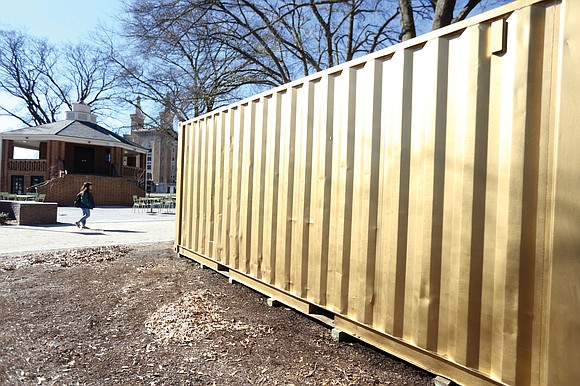 This is the portal that awaits visitors in Monroe Park. Despite the simple shipping container exterior, the interior includes high-tech equipment that provides connections to cities around the world. Photo by Regina H. Boone Richmond Free Press

A gold-painted shipping container that can transport you around the world without spending a dime has been placed in Monroe Park.

Enter this portal, and instantly you will be connected via videoconferencing to people who have entered a similarly equipped portal in far off places such as Rwanda, Palestine, Honduras or Germany or closer locales like Milwaukee and Chicago.

You can chat with them or take part in dance parties or other activities while making an unexpected connection.

This simple, but remarkable public art project is the brainchild of artist and journalist Amar Bakshi, who created the first one in 2014 in the backyard of his parents’ home in Washington, D.C. He chose a shipping container because it was easy to fix up and selected the gold shade of paint that he felt conveyed sacredness, he said.

Mr. Bakshi created the portal because he missed conversations he had with people as a correspondent for the Washington Post and wanted to develop something that could “connect people who wouldn’t otherwise meet.”

He made the first connection between an American art gallery and a contemporary art center in Tehran, Iran, with help from journalist Michelle Moghtader. Since then, the idea has spread with the creation of more portals that are interconnected.

Mr. Bakshi, Ms. Moghtader and others from the Washington art collective Shared Studios that he started now operate the program with help from sponsors and supporters in other cities.

An unidentified Richmond couple picked up the cost to bring the portal from Boston to Monroe Park, the first of four sites in Richmond where it will located during the next 12 months.

Karen Manning, an area resident looking for a new challenge, has been tapped to be the curator for the portal that will begin operating Thursday, Jan. 24. Since October, she has worked to secure approvals and ensure the portal will operate properly.

“When you enter a portal, you come face-to-face with someone somewhere else on earth, live and full-body — as if in the same room,” she said. “What we are doing is connecting people separated by distance and differences in their lives.”

While in Richmond, the portal will connect locals with people in Afghanistan, Honduras, Iraq, Jordan, Mexico and many more locations across the world, with language interpretation available, she said.


The portal will be open about 10 to 15 hours a week, Ms. Manning said, with a schedule showing the specific times and places to be connected with Richmond. It will be open without charge on a first-come, first-served basis, she said.

She said individuals or small groups can enter at one time, with the amount of time one can be inside dependent on the line.

The portal will remain in Monroe Park through April 30, before moving elsewhere in the city.

People can either come to the site or make reservations for specific times, she said.