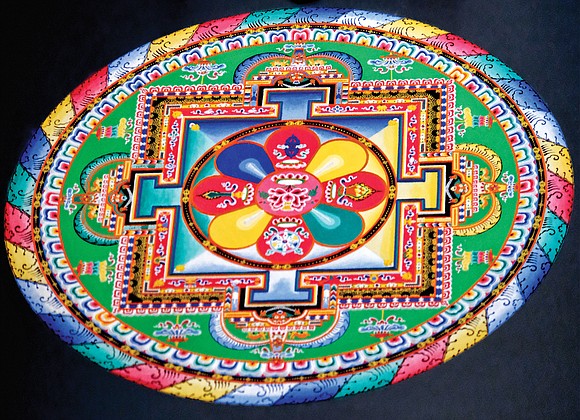 Tibetan Buddhist monks from the Drepung Loseling Monastery in India create a sand mandala at the Virginia Museum of Fine Arts recently to share Tibet’s sacred visual and performing arts with area audiences. The monks’ work, created over four days, was completed in conjunction with the VMFA’s new exhibit, “Awaken: A Tibetan Buddhist Journey Toward Enlightenment,” that features roughly 100 historical and contemporary objects highlighting the role of art in Tibetan Buddhist culture and religious practices. The exhibit, which runs through Aug. 18, is drawn from Himalayan art collections at the VMFA, the Asian Art Museum in San Francisco, the Rubin Museum of Art in New York, the Newark Museum in New Jersey, the Museum of Fine Arts in Boston and private collections. The monks’ visit is part of the Mystical Arts of Tibet World Tour endorsed by His Holiness the Dalai Lama. The monks will return on Aug. 3 to dismantle the mandala. 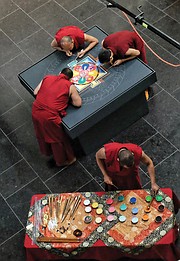