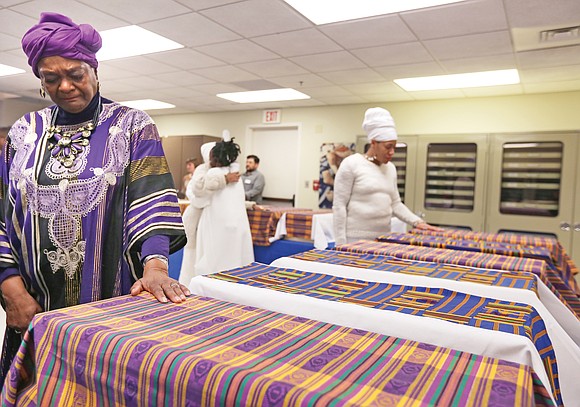 Richmond Delegate Delores L. McQuinn, a minister and chair of the Richmond Slave Trail Commission, prayerfully puts her hand on the Kente cloth covering one of 17 boxes of human remains found in 1994 in a well on Virginia Commonwealth University’s medical campus. The remains, which were returned to Richmond during a ceremony on Monday, will be stored by the state Department of Historic Resources while planning for an appropriate burial and memorial continues. Photo by Regina H. Boone

Virginia Commonwealth University and scores of interested people lined the 300 block of North 12th Street on Monday to somberly welcome hearses carrying the human remains found in an abandoned well 25 years ago during a construction project on the university’s medical campus.

Gov. Ralph S. Northam joined Mayor Levar M. Stoney, Richmond Delegate Delores L. McQuinn, also chair of the Richmond Slave Trail Commission, and dozens of others in participating in the ceremonial return of the remains that the Smithsonian determined to be those of nine young children and 44 others ages 14 and older, none of whom have been identified. 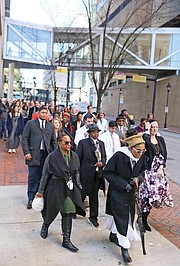 An African ritual was part of the ceremony described as a time “we answered the call of our ancestors” by Dr. Joseph Jones, chair of VCU’s East Marshall Street Well Project Family Representative Council that was formed in 2015 to represent descendants of those whose remains were found.

The ceremony of return was held in the auditorium of the Hermes A. Kontos Medical Sciences Building at 12th and Marshall streets that now covers the well site discovered in 1994 during the building’s construction. Then VCU President Eugene P. Trani had the bones and other artifacts found in the well sent to the Smithsonian for further research.

Dr. Kevin Allison, who has led the East Marshall Street Well Project for Virginia Commonwealth University, and first-year medical student Gerald Coronado transfer the remains for the ceremony at the sciences building.

The remains now will be stored at the Virginia Department of Historic Resources until VCU and the East Marshall Street Well Project committees move forward with recommendations on a final resting place, possibly the city-owned African Burial Ground in Shockoe Bottom. VCU has been pondering that issue since 2013.

As best as VCU officials have been able to determine, the remains were those of people whose bodies were used in teach- ing medical students about human anatomy prior to 1860 when the well was capped.

As Dr. Shawn Utsey, chairman of VCU’s African-American Studies Department, has documented in writing and film, the remains exemplify VCU’s participation in the purchase and theft of bodies of dead slaves and other black people during the 19th century. It was common practice before Virginia and other states lifted their ban on using bodies for medical purposes. Virginia did not create a state-managed body donation program until 1919.

At the ceremony, Gov. Northam, a physician, said, “It was wrong for medical doctors and students to use African-Americans, whether they were experimenting on the living or working on the stolen bodies of the dead.”

So far, a 15-member planning committee VCU established a few years ago, along with the 10-member Family Representative Council, have indicated they would want the bones and associated artifacts buried in a public and inclusive ceremony based on West African burial traditions at an appropriate location.

Along with urging a proper burial, the council members also are recommending further research into the genetic ancestry of the remains and into the ties between the well and the African- American experience in Richmond and construction on the VCU campus of an appropriate memorial to the individuals.

In addition, VCU is being encouraged to hold an annual ceremony for medical students to commemorate people whose remains are used to assist in their education.